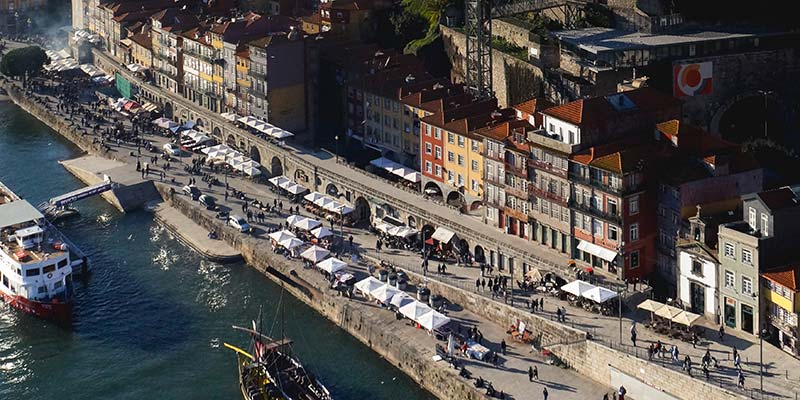 Last year, I had the pleasure of visiting, for the very first time, the grand city of Porto and, consequently, I was able to try my very first ‘Francesinha’, which we will talk about later.

Porto is the second largest city in Portugal and one of the oldest in Europe, so I hopped on a train with a friend and we crossed the Douro River via the São João Bridge, one of the six bridges that unites the cities of Vila Nova de Gaia and Porto. Apart from both cities boasting the exact number of bridges, Porto is the only city in Europe famed for having six bridges crossing over the same river. This is due to the fact that Porto is responsible for maintaining and running all six bridges.

During the early 1800s, the first bridge was built across the Douro River and consisted of 20 wooden boats tied together with steel chains. However, during the Napoleonic Wars, the French invaded Portugal for the second time, which culminated in the First Battle of Porto where the French ultimately defeated the Portuguese on March 28, 1809. As a result, thousands of civilians drowned as they fled across the bridge of boats which collapsed due to the number of people trying to escape.

Following the tragedy, the bridge of boats was in 1843 substituted by a suspension bridge, known as the D. Maria II Bridge, but this bridge was also demolished 45 years after its inauguration to make way for Porto’s most famed and beloved bridge, named after the ruling king of the time, D. Luís I.

The Luís I Bridge is a double-deck metal arch bridge and, at its time of construction, was considered the longest of its type in the world. According to legend, the king didn’t attend the inauguration of the bridge built in his honour and, for that reason, the people of Porto decided to remove the title “Dom” from the name of the bridge as a sign of disrespect towards the king.

Dom was originally a title reserved for royalty, select nobles and church hierarchs and, as you walk under the bridge, you can still read the original sign that reads Ponte Luís I (Luís I Bridge), which is ironic as he was known throughout history as King Luís I “The Popular”.

During his reign, he never took a huge interest in politics and instead focused his interest in culture and arts. Painting and drawing were a large part of his life, as was music for he played both the piano and the cello. The king also had a passion for oceanography, funding scientific projects and research for specimens of the ‘seven seas’ which led to his son opening one of the world’s first aquariums, the Aquário Vasco da Gama in Lisbon. He also had a passion for literature and languages, and he was responsible for translating various Shakespearean works into Portuguese.

Although the Luís I Bridge is the most famed bridge of Porto, a similar bridge had been constructed 1km east, just nine years prior. This bridge was Porto’s first railway bridge and was named after D. Maria Pia, wife of Luís I. It is attributed to Gustave Eiffel, who is best known for his world-famous Eiffel Tower and engineering similarities can easily be seen between the two structures. However, the bridge is no longer used as it was replaced by a more modern and larger bridge in 1991 named the São João Bridge as it was inaugurated on the day that celebrates the birth of John the Baptist.

To keep up with the ever growing population, three more bridges were eventually constructed, the Arrábida Bridge in 1963 which is the closest to the Atlantic Ocean, the Freixo Bridge in 1995 which is today the busiest bridge with over 100,000 cars passing through daily and, finally, the Infante D. Henrique Bridge in 2003.

The last-mentioned bridge was named after the Prince Henry the Navigator, an important figure in Portuguese History and the main initiator of what would later be known as the Age of Discovery. In 1415, the very same Prince embarked on the conquest of the Moorish port of Ceuta. During that time, the people of Porto gave the sailors their best cuts of meat and merely left for themselves the ‘tripas’ (tripe), the lining of animal stomachs with which they invented a new dish. To this day, the people of Porto are commonly known as “tripeiros” in honour of their gesture many centuries ago. Made traditionally with beans, tripe remains a culturally important dish in modern-day Porto.

Now to the Francesinha! No trip to Porto is complete without the sampling of Porto’s equally renowned and award-winning Francesinha made with bread, ham, linguiça and roast meat covered with melted cheese and a hot thick tomato and beer sauce. Invented by Daniel Silva on his return from France in 1953, each local individual has their favourite restaurant claiming to have the ‘best’ typical Francesinha and that is why each day I spent in Porto I just had to try to find the best one!