Portugal Resident
Home Original The Day after Tomorrow has arrived 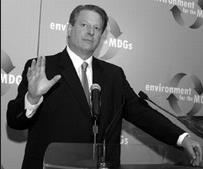 A FRIGHTENING and thought-provoking documentary on the consequences of global warming opens in Portugal this month.

Based on the best-selling book An Inconvenient Truth by former US Vice-President, Al Gore, and his globe-trotting lectures aimed at raising awareness about the problem of increased carbon dioxide emissions in our earth’s atmosphere, the two-hour film brings together the irrefutable evidence from scientific research over the past few decades to show this.

The conclusions are that, between the next 10 to 50 years, the world will face a cycle of man-made natural disasters on a scale unprecedented in the history of mankind in the last 11,000 years.

What does the future hold?

Of course, the themes featured in this film are nothing new, but what is so scary is the way all of the various bodies of opinion and findings, since the late 1950s, have been brought together in one single film.

Imagine the scenario, within our own lifetimes, of most coastal areas being under water with major coastal European cities looking more like Venice than London, Lisbon, New York or Copenhagen.

That is the prognosis if the ice sheets covering the North and South Poles and Greenland continue melting at the rate they are.

Imagine a situation where Portugal, from Lisbon to the Algarve, is completely deforested by fires in previous decades; a windy, dusty and barren desert more like Morocco than what is seen today.

Pause to think about coastal areas in the Algarve being lashed and eroded by storms at an alarming rate, whole tourist resorts being swept away.

According to Al Gore, humanity is sitting on a time bomb and, if the vast majority of the world’s scientists are right, we have just 10 years to avert a major catastrophe that could send our entire planet into a cycle of epic destruction involving extreme weather, floods, droughts, epidemics and killer heat waves beyond anything we have experienced.

An Inconvenient Truth is not just some politician jumping on the environmental bandwagon, far from it, Al Gore has been campaigning on environmental issues since the 1970s and has travelled the four corners of the globe delivering over 1,000 lectures in the past few years since he lost the race for the White House in 2000.

Whether you like the man or not the facts speak for themselves.

Since the advent of the industrial revolution in the early 19th century levels of pollution, caused by the burning of fossil fuels, have jumped threefold beyond the levels that had existed for thousands of years.

That acceleration has continued in an alarming upward curve since the 1960s and will continue to climb unless we do something now.

Al Gore passionately argues that following the devastating hurricane Katrina, which flooded New Orleans last year, we have reached the tipping point, and Gore pulls no punches in explaining the dire situation.

The film is the story of Gore’s personal journey from an idealistic college student who first saw an environmental crisis looming; to a young senator facing a harrowing family tragedy that altered his perspective. He turned his attention to the most important cause in his life, convinced there is still time to make a difference.

We can no longer afford to view global warming as a political issue, rather it is the biggest moral challenge facing our global civilisation.

The film brings together research from top scientists around the world with photographs, charts and other illustrations to document the results of global warming.

In Portugal, environmental group Quercus has reported that millions of fish have been dying in the Lagoa de Melides at Grândola because of agricultural pesticides and draining.

Emissions of greenhouse gases have risen alarmingly because of the electricity, cement, paper producing and refining industries.

Between 2005 and 2007, 38,161 megatons of CO2 will have been generated by 244 industrial installations, representing 46 per cent of all emissions in Portugal.

Dr. Filipe Duarte Santos, Professor at Lisbon University’s Faculty of Sciences, who is in charge of Project SIAM (Impact of Climatic Change in Portugal), says that most of his colleagues have tied in the increase in droughts and floods in the country with climate change.

He and his team are currently studying the effect of climate change in the Azores and Madeira, which are particularly vulnerable to climatic changes with the average temperature rising by 0.47 of a degree in the former and one degree in the latter.

“The lack of sustained rainfall will have a knock-on effect on water resources, while hotter summers and climate extremes will increase droughts. In winter, more rain will fall in short intervals causing floods, and this will effect biodiversity and forestation,” Santos said.

Already, Portugal’s accumulated rainfall is at its lowest level in 70 years, while the fires in recent years have consumed 85 per cent of the areas affected with 8,000 hectares being lost in Leiria (central Portugal) alone.

“Legally, successive governments have done very little to change the situation that is nothing short of shameful for Portugal,” Santos concluded.