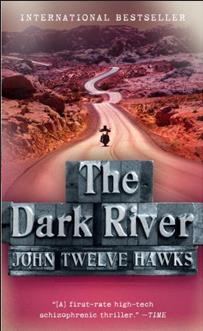 THE DARK RIVER by John Twelve Hawks is out in paperback at 9.80 euros

Book two in the Fourth Realm trilogy (The Traveller being the first), this is the stuff of which first-rate, high-tech, paranoid-schizophrenic thrillers are made.

Fear stalks our lives, in the press, on the television, over the airwaves, across the internet. Everywhere you go, someone somewhere is always watching. Waiting for the mistake that will reveal secrets, truths, lies, the real story or what they want to believe. No longer is anonymity a given right. And small freedoms are sacrificed daily, never to be returned.

There are some who will fight to the death to protect those freedoms. They live off the grid and Gabriel Corrigan is one such man. The system, however, says that you cannot opt out, that you have to participate and it will do whatever it takes to return Gabriel to the fold – alive or dead. It will pursue him to the ends of the earth. From the underground tunnels of New York and London to ruins hidden beneath Rome and Berlin to a remote region in Africa that is rumoured to harbour one of history’s greatest treasures, Gabriel will fight his running battle for freedom against forces that even he cannot see…

If you enjoyed Philip Pullman and Dan Brown’s exotic plots, then you will definitely love this pacy thriller with tones of George Orwell.