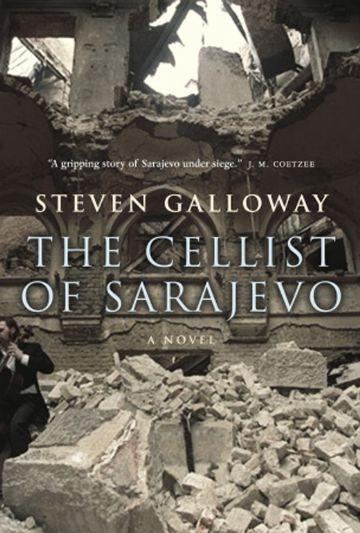 This review was written by the Almancil Bookclub, a group of keen readers (Jane, Pru, Jilly, Viv, Moira and Jackie) who meet monthly. The Griffin Bookshop organised free copies of the book for the group and guidelines for the review. The resulting article will appear in next month’s UK monthly Booktime magazine.  If you’re a member of a book group in the Algarve and would like to do the same, contact the Griffin Bookshop on 289 393 904.

Almancil Bookclub has been going for 18 months and they judge the quality of their ‘monthly’ book by how long they are prepared to delay lunch! The latest, The Cellist of Sarajevo is about a cellist who, in war stricken Sarajevo, vows to play Albinonis Adagio for 22 days to commemorate the lives of 22 people who were killed while queuing for bread outside his window.

The cellist is the thread that connects the other three main characters in the book. Each chapter plunges the reader straight into the daily struggle for survival of each of them.

Dragan, who lives with his sister and her family, has managed to send his wife and son to safety. He avoids old friends, focussing on his survival by trying to cross dangerous intersections of the bombed out city, dodging bullets that might kill him.

Keenan lives with his wife and two small children. Every four days he is forced to go out to get water for his family and an unkind, selfish elderly neighbour. You feel the weight and responsibility of what he does in each water bottle he carries.

Arrow is a young woman who will not acknowledge her real name because it represents links of who she was before the war. She now works as a sniper for forces within the city and is given the task of protecting the cellist against the snipers who will inevitably come from the hills to kill him.

The Book Club recommends this beautifully crafted book, which gives a haunting account of how war affects ordinary people and how they struggle to maintain their dignity and humanity in the face of impossible circumstances. Loosely based on a true account of a cellist in Sarajevo, the book is not a slave to the truth of this most recent war but rather the truth of the situation of all wars and seems to emphasise the futility of all the destruction.  If anything, the book stopped short of revealing the depth of the characters and left us wanting to know much more, but nevertheless a good read.