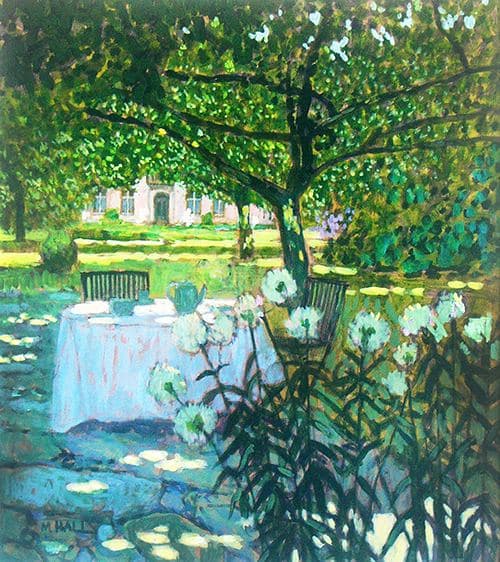 More than a century ago in São Domingos in the Alentejo a quintessentially British village was built. Its purpose was to replicate the sort of lifestyle that its inhabitants would have enjoyed back home. Recreating a similar ambience in his paintings, Mike Hall – a graduate from the Royal College of Art – is exhibiting his work at Galeria Côrte-Real in Paderne.
São Domingos, famed since Roman times for its rich mineral resources of copper, pyrite and sulphur, became the focus of a mining operation run by the British firm of Mason and Barry.
Opened in 1857 at its peak, the mine employed 10,000 workers run by a team of British executives and administrators. In due course, their families joined them to live in comfortable purpose-built accommodation located round a village green.
The features of each house bore no resemblance to Portuguese buildings emulating instead typical British architectural styles. The central bandstand was the village’s focal point and nearby tennis courts and playing fields enabled the inhabitants to feel perfectly at home.
Mason and Barry built one of the first electric generators in Portugal for supplying power to the mine; there were added benefits as homes in the British village were provided with efficient lighting.
Employing local people as domestic staff and gardeners, the lifestyle for many expatriates was more leisurely than they had ever experienced before. A short distance away, row upon row of one-roomed cottages built by the firm accommodated the Portuguese miners and their families. Existence for the miners was harsh as compared to the genteel way of life adopted by the British.
Seventy kilometres east of São Domingos, a similar operation was going on at the Rio Tinto mines in Spain, run from 1871 by a British syndicate. A village, ‘Bella Vista’, built specifically for British employees was dubbed by the locals ‘Colónia Inglesa’. Just as at São Domingos, the expatriate community did not fraternise or socialise with their employees.
This period of history is drawn together in a novel by the English author Pamela Oldfield. Entitled ‘The Passionate Exile’, the story recounts daily life in the British village at São Domingos. The author successfully recreates the intimate atmosphere of an expatriate community living abroad. Capturing a similar ambience on canvas, Mike Hall’s paintings transport the viewer to another place and time.
In the case of São Domingos, the original administrative headquarters of Mason and Barry, which closed in 1966, has been authentically restored into a fine hotel, Estalagem São Domingos. It is a short walk from the British village where the bandstand and many of the abandoned houses can still be seen. There is no longer any sign of the pristine rose beds and hollyhocks that once grew in the front gardens.
Using his artistic imagination, Mike Hall combines the real with the imagined, a factor that appeals to the owners of Galeria Côrte-Real.
As explained by Pedro Corte-Real, “his creative forces have been used in many compositions. He paints actual images and then imbues the scene with fiction”.
After graduating from the RCA, Mike became a freelance interior designer and later a set designer for Thames Television. His first love is painting and in Portugal, through his ongoing relationship with Galeria Côrte-Real, new exhibitions of his work are highly anticipated and well attended.
Visit Côrte- Real’s new Pop-Up Gallery located above the estate agents ‘Fine and Country,’ close to the beach in the centre of Carvoeiro, Rua do Barranco.
The main gallery ‘Galeria Côrte-Real’ is signposted from Boliqueime, Ferreiras and Paderne. Open Thursday to Sunday, frm 11am until 5 pm.
912 737 762 | www.corterealarte.com
www.hotelsaodomingos.com
By Carolyn Kain
Photo: Refined British living, painted by Mike Hall and on display at Galeria Côrte-Real in Paderne