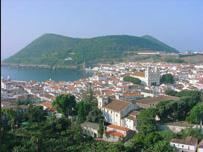 IF YOU long for the Algarve of the ‘olden days’ then you will love the Azores. A group of islands located some 1,500 kilometres off the coast of Lisbon, the Azores are simply delightful and are easily reminiscent of the Algarve I first visited nearly 25 years ago.

Free of the hundreds of thousands of tourists that swarm to the southern most tip of Portugal every year, the Azores is a haven of peace and tranquillity. Of course, they have their fair share of visitors but nothing like we experience here, especially in the throng of July and August.

The islands also attract a different ‘breed’ of tourist, those who

appreciate the simple things in life such as a stunning view or a small church nestling in a tiny village along the coast. Lager louts and binge drinkers certainly won’t be found here!

São Miguel, São Jorge, Santa Maria and Corvo. I have had the privilege of visiting three islands and my favourite – and that of my fellow travellers – was easily Terceira. Breathtakingly beautiful is the most fitting description of the tiny isle which seemed so far removed from the Algarve.

Known for being a volcanic region, the islands are filled with craters, cones and lakes and the island of Pico is the highest in the region, standing at 2,351 metres high. From neighbouring Faial, Pico stands mightily to attention in the background of most picture postcards.

One of the things we kept noticing was the lush greenery throughout the islands, no doubt caused by the fertility of the volcanic soil. Having spent a hot and dry summer in the Algarve, it was in sharp contrast to what was found on these islands.

Easily accessible from Lisbon airport, the islands are just a two hour flight away and it is possible to ‘island hop’ once there. We chose a great package deal from a local tour operator who organised flights to Terceira, where we stayed for a couple of days, before hopping on a plane to Faial, and a few days later our last stop, São Miguel – the largest of the nine islands.

Each island has a number of hotels to choose from, and it is possible to hire a car in order to explore the stunning scenery further.

If you decide to take a walk around any of the numerous craters, be very wary of the weather. While out walking one day, a heavy mist descended on my party necessitating a rescue operation by the local bombeiros… very embarrassing to say the least, particularly as they were all wearing flip flops!