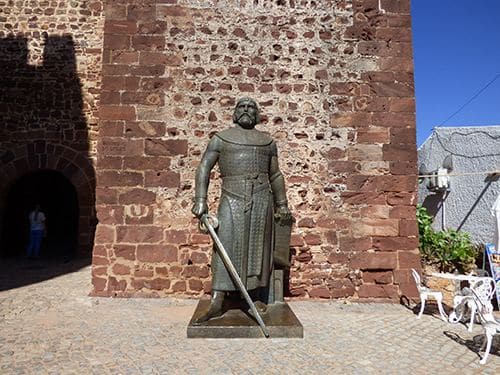 Barão de São João is one of those villages tucked a few kilometers from Lagos inland from the coast that even people familiar with the Western Algarve can easily pass by. Yet something quite amazing happened this summer which should lay the foundations for years to come. The whole village from street level through to its restaurants, cafes and shops became an art gallery.

Walk down the main street from the church and you will see brilliantly coloured larger-than-life sculptures. Further along, one can look into the studio of Else van der Laan or Eva Herre.

A massed procession of tiled footprints by Antonio Alonso climb up wall while further along there is Xico Rôxo’s large wood carving of St John. The village’s namesake also appears perched on the roof of a ruined cottage with a seagull on his head and a fish for a foot – another brilliant work by Deodato Santos.

The village is a sort of artwork’s treasure hunt with visitors never quite knowing what comes next or where to find it. Pop into a café and you will likely see a brilliant tiled artwork rather than the typical faded prints found in small catering establishments and shops.

The idea started 13 years ago when retired art teacher Deodato Santos and some friends decided it would be good to have a cultural centre and build up an ‘artistic village’. Although it was a long time in the making, the final stages happened quickly when in January this year Deodato and internationally acclaimed artist Antonio Alonso formed a working group joined by fellow artists: Ana Canto, Ana Rijo, Carl Zimmerling, Else van der Laan, Eva Herre, Eduarda, Gael, Gonçalo Cabral, Pedro Correia, Radza and Xico Rôxo.

Themed on the village’s namesake St John the Baptist, the Junta de Freguesia enthusiastically came on board along with Lagos Câmara. Deodato explains the group’s working philosophy: “Our main principle was to be able to make quick decisions, involve the whole village and have local shops agree to look after the artworks whether they were inside or outside their premises.”

The show opened on June 22 and by public demand and at the request of shop owners was extended until the end of August with the addition of extra artworks. Now following the Algarve Resident’s visit, it has been extended a further week so that readers can take the Barão de São João walk of artistic discovery for themselves. After completing that, further up in the beautiful forest behind the village one can take the Poets Walk and read quotations inscribed on stones along the way.