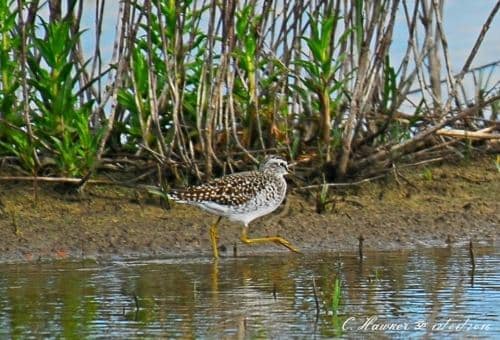 German born Helga H. Hampton first came to the Algarve with her three children in 1972. After she and her husband retired, they became residents here and have been living in an old quinta in São Brás for 10 years. Helga has always been involved with music and was President of the Associação Amigos de  Música de São Lourenço for 10 years.

What would our eating enjoyment be without salt? It is not far-fetched to assume that salt as a food condiment entered human civilisation when Neolithic peoples began to be on the move.

All of a sudden it became necessary to “conserve” food in order to ensure that there was always something to eat wherever they roamed. They discovered that these rock deposits that their animals had been licking or the residue from sea water that appeared on the beaches could be used to preserve meat and fish for long periods of time.

And thus began the triumphal march of the most important spice known to man.

The history of salt accompanies the history of civilisation. Where salt was plentiful it was bartered for other commodities, so trade was born.

The Egyptians are known to have traded salt with the Phoenicians for wine and other luxury goods. Roman soldiers received a “salarium”, money for the purchase of salt (Latin for our word “salary”).

We can now say that the mineral content of salt contributed greatly to the growth of populations, by providing primary electrolytes the body needs: sodium, potassium, magnesium and calcium.

Many bodily frailties can be attributed to either abuse or deficiency of sodium chloride. World nutrition authorities recommend an intake between a minimum of 2gr and a maximum 4gr of salt per adult per day.

In our day and age, it is impossible to think about cooking without salt. And overdeveloped as our modern civilisation has managed to become, the common white powder that came out of a shaker in the middle of the table is now old hat.

So what if it was purified, refined and iodized, i.e. used as a subliminal vehicle to help avoid thyroid problems, much like fluoridised water became a dental agent.

Marketing, of course, played an important role by telling us that we cannot live without coarse sea salt, rock salt, smoked salt or fluffy salt flakes or indeed the flower of salt.

Fleur de sel in the late 1980s was brought to the market by French chefs as indispensible in and for gourmet cooking worldwide.

But the US magazine Atlantic Monthly soon said: “We discovered in Portugal salt even sweeter, whiter and incidentally much less expensive than the French fleur de sel from Brittany.”

In the Algarve, this “cream of the Atlantic” comes from a particularly pollution-free habitat, the Ria Formosa.  These “salt gardens” between the coast and outlying islands near Olhão and Tavira form part of a Nature Park with great bio-diversity of shell fish and other marine life.

Here, where the ocean enters the Park, the marshy mud has a special quality that is beneficial for the “Salinas” or salt pans that have been worked here for thousands of years.

The firm of Rui Simeão, in Tavira for over 100 years – they are only one of several local salt producers – claims to have pioneered the production of Flor de Sal two years before other producers.

Called “rennet” or “coalho” in the salt business, this by-product as it initially seemed, was only destined for personal use. Today a great part of their production is for export worldwide.

The difference between sea salt and flor de sal lies in the harvesting method. Traditional sea salt settles on the bottom of a salt pan during the process of concentration and evaporation, whereas flor de sal floats on the surface.

The thin, very fine layer of salt that crystallises on top of the salt pans looks like a gossamer filament.

Nobody knows why and how it develops from time to time – it does not always do so. Prerequisites are optimal conditions of hot, very dry, calm, wind-free and sunny days.

This “blossoming skin” is harvested in the height of summer and only by hand with special skimming tools. It is deposited in airy, perforated crates for drying.

The Algarvean flor de sal is pure white, as compared with the grey fleur de sel of France, the black Hawaiian equivalent or the peach-coloured product from the Murray River in Australia. It is deliciously soft and crumbles when rubbed between the fingers. Only the first harvest of a salt pan makes the true Premium Quality Flor de Sal and quality controls are very strict.

Harvesting of salt from the surface of salt pans is not a modern invention. Recent China research says that 6000 years ago the inhabitants around Lake Xiechi collected salt from the “surface of the lake”.  This knowledge must have been lost somehow, for our flor de sal “fad” is rather more recent.  Like many “new discoveries”, it took an “aha” moment by an astute person, who observed that this crystallised film on the surface of a watery salt pan disappears after a short while when the crystals sink to the bottom and settle there, together with the “normal” sea salt unless they are collected and separately dried. So, flor de sal was born.

And a good thing, too, because scientific research shows that this virginal salt is the richest in trace elements. It contains all 84 elements and micro-nutrients found in the sea, i.e. it is very healthy and an invaluable addition to human nutrition.

It dissolves quicker than other sea salt and should not be used in the cooking process, but added to ready meals. And it adds flavour – try it on a beautiful steak or fish or indeed on some succulent ripe Algarvean tomatoes. Hmmmm! Vale a pena paying extra for this excellent enhancement of our daily food enjoyment.