It’s time to take a step back, look at the last 10 years and talk about the industry I love and the cars that have made me lose countless sleeping hours, dreaming of ways I could, eventually, own them someday.

Wow. Ten years have gone by since I first wrote about the best cars of the previous 12 months. And, more than the change in the cars themselves, it is clear the biggest news of the last decade is the shift in the industry itself.

We are being pushed towards an electric future that simply makes no sense at all and is, from my point of view, impossible to implement. Quietly but firmly, some manufacturers are starting to question this set of illogical rules and pointing out that the targets set by the EU or the British government are, if not nonsensical, at least fairly unachievable.

The idea that we must all save the world by abandoning petrol and diesel-powered cars while private jet companies cannot keep up with demand, world travel by plane is at an all-time high, cruise ships are fully booked and tourism seems to be the answer to every country’s financial woes makes me really mad. As if cars that run on rare metals mined by slave labour are the answer to anything.

Two weeks ago, I was at a lunch thrown by one of the world’s biggest watch brands. The CEO of the brand had flown from Qatar for the event – and was flying back right after – and I commented with a colleague that knows how I feel about the whole electric car hypocrisy that this specific ‘situation’ had produced more CO2 in one totally unnecessary flight than I will throughout all my life driving petrol-powered cars.

He laughed and said that just the weekend before he himself had flown from Lisbon to New York for dinner in a private plane belonging to a company his family works in. No reason. Just because they could. This is the actual reality we live in. Don’t buy into the whole electric car narrative being the path to cleaner water and brighter skies.

I believe in the next two to three years more and more manufacturers will demonstrate the targets governments have set are impossible and that the main thing to do is to find a way to make the current combustion fleet more sustainable through synthetic fuels and to look at real, capable alternatives to battery electric vehicles. Fuel cells maybe. Hydrogen. I am not sure, but I do know a car running on lithium batteries that you plug into a socket to charge is not going to save the Earth. And I really am fed up with the whole hypocrisy around it. But enough about that.

On to more joyful things. Ten years of awards. I thought we’d do a Best of The Best from the last decade. The five best cars I drove in the last 120 months. And with one rule only: I have to have driven it at least for a day; just a quick drive around the block doesn’t count (oh, and they cannot all be Ferraris).

So, let’s begin. Number five: the BMW M5 CS. Last year’s winner. The car I said was the best BMW had ever made. And I still think that is true. The M5 CS doesn’t have the luscious appeal of a mid-engined supercar or the pedigree of an M3 CSL and, for the untrained eye, it may look just like a regular 5 Series with a few bits and bobs in bronze, but it so isn’t. The M5 CS is the most engaging big saloon there has ever been, with a unique ability to bring the driver into a world where driving is much more than going from A to B.

The fact it looks so ‘normal’ just adds to its appeal, since the guy standing next to it at the traffic lights has no idea a few feet away from him there is an enormous 4.4 litre turbo V8 pumping out 635 horse power. It cost €235,000 in Portugal when new, €50,000 more than in some other European countries and you can pick one up today for around €150,000 in Germany. I hope prices keep coming down to a point where I can get my hands on one.

Up next, well, it’s also a car from last year’s awards. The runner-up from 2021 was the once-in-a-generation Toyota GR Yaris, the small Japanese hot hatchback that is the heir to the homologation specials from the age of Group B and Group A rallying. Built to satisfy the Gazoo Racing Toyota Rally Team technical demands, the go-faster Yaris is a riot to drive and makes every mundane drive to the supermarket feel like a special stage of the World Rally Championship.

It may only come with a 261 horse power three-cylinder 1.6 litre engine, but the raw energy of this thing beggars belief – and is only surpassed by the dynamic abilities of a chassis you instantly feel was developed by people who love cars and love racing. Second-hand cars with under 10,000km cost the same or more than the €47,000 Toyota asks for a new one and no matter what cars become in the future, the GR Yaris is already a legend. It’s also the only one in this group I own and I have loved every kilometre of the last 18 months.

Podium time. It’s a Porsche taking the bronze medal. And, shockingly maybe, not a 911. Of all the Porsches I have driven to this day, the 981-generation Cayman GT4, the first one, is my favourite. Back in 2015, Porsche’s board finally gave the motorsport department a Cayman to play with and they promptly created a masterpiece. The GT4 followed in the footsteps of a long line of GT3 and GT2 nine-elevens, the most inspiring models produced by the Stuttgart manufacturer but with a more playful side – less all-out speed, more fun.

The world fell in love with the Cayman GT4, and I did too. It didn’t even need a motorsport-derived engine. With 385 horse power, the 911 Carrera S’s did just fine and, mated to a six-speed manual gearbox that was surely sprinkled with some fairy dust, it made for a driving experience second to none. Porsche then built the second-generation 718 Cayman GT4 in 2020 and this year even gave us the ultimate 718 GT4 RS, the fastest, more powerful Cayman ever. But, for me, the first one is the most special.

Prices went up like crazy in the early days, then they came down to about 15% of the original sticker price and now they cost the same they did when new. A sound investment no doubt – especially in yourself, as this car will bring you endless memories and moments of pure driving pleasure.

Before revealing the silver medal, I have to remind you this is not an impartial analysis. It’s my personal taste for cars. And for me it was always going to be a Ferrari. Or two.

The first one, meaning it comes second on my list, is the 488 GTB. The car that, when it came out in 2015, was not as loved as its predecessor, the 458 Italia because it heralded the end of 40 years of natural aspiration for the Ferrari V8, replaced by force induction. The 3.9 litre turbo V8 in the 488 is, however, an extraordinary powerplant, taking the award for International Engine of The Year four times in a row from 2016 to 2019.

The 488 has so much performance it is ridiculous. How can you put this much speed in the hands of potential untrained drivers? The 488 seems to fly, to have a never-ending surge of acceleration that makes it feel feather light. But – and this is why this car is so spectacular – it is always talking to you, always feeding you information about what it is doing and involving you in the process.

If you know what you are doing, those 670 horse power are very exploitable, and they work with you through the various driving modes to extract the best from a chassis that is the work of a group of magicians. I could write about the 488 GTB for pages and pages because there are so many nuances to this car that it’s impossible to get tired of it.

The car I drove belongs to a friend of mine and he lets me take it for a spin every now and then. On each drive, it’s like I have never driven it before. The surprise is always there. The magic. The admiration. I love this car.

Prices bottomed out in 2020 and are now 20% above what they were then. In Portugal, you need at least €240,000 to get a good one and, although that is a lot of money for a second-hand automobile, it is worth every penny.

So, what is the thing that can beat a mid-engined Ferrari V8? A front-engined Ferrari V12, obviously. And that car is the F12 Berlinetta, a 6.3 litre naturally aspirated V12 work of art that revs to almost 9000 rpm and makes every drop of fuel feel like it has fulfilled its life’s goal. The F12 is a car in the most traditional Ferrari mould, with a transaxle layout of engine up front, gearbox at the back and drive to the rear wheels.

The F12 is also a car that must live up to that most famous lineage in the automotive industry, the Ferrari V12, which encompasses such historic models as the 250 TDF, the 250 Berlinetta SWB, the 250 GTO, the 275 GTB, the Daytona or the more modern 550 Maranello.

The F12 is not only a worthy successor to all of those, it is a modern classic in its own right, demonstrating how modern thinking and modern engineering can make such an old-fashioned layout feel head and shoulders above all rivals. The F12 is the answer to any automotive question any petrolhead may have, mixing passion, art and technical prowess in a way only the Prancing Horse knows how.

Driving the F12 is driving 70 years of Italian heritage. You feel the magic within the first 100 meters. If you are already a Ferrarista, you know you are driving what is one of the greatest ever cars to come out of Maranello; if you are not, the F12 will be the tangible explanation for everything you have ever read about Ferrari.

Now where did I put Santa’s email address? He’ll be hearing from me. Happy Holidays to all. #KeepDriving. 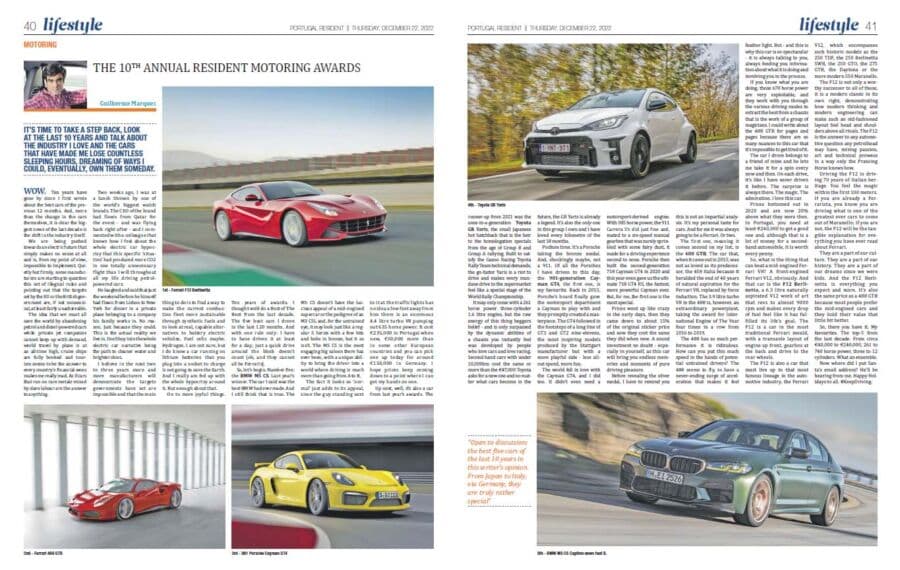