Unfortunately it was low tide when the ferry from Ao Nang, in Thailand’s southern province of Krabi, was due to leave for the two-hour crossing to the beautiful island of Koh Lanta. So all 200 passengers and their luggage had to be carried from the pier out to the ferry in an assortment of small craft.

Dozens of cheerful, noisy Thai boatmen were clearly quite used to this mammoth task and herded the bewildered tourists and their suitcases on and then off their ‘long-tail’ boats with remarkable dexterity.

Amazingly, the ferry left on time and soon we were admiring Krabi’s stunning coastal scenery – a mixture of dramatic limestone crags rising sheer from the water’s edge and scores of picturesque offshore islands with dazzling white beaches. Perhaps the most recognizable was Koh Gai (meaning Chicken Island in Thai). Koh Gai takes its name from a distinctive chicken-shaped rock at its southern tip.

Our destination was the little town of Saladan, the capital of Koh Lanta Yai, which is the larger and more developed of the two Lanta islands. The other, Koh Lanta Noi, separated from its sister by a long mangrove-filled channel, slumbers quietly nearby, almost unaffected by tourism.

Saladan is a rather scruffy fishing settlement that has great character, with a higgledy-piggledy mixture of old teak wood buildings, restaurants, souvenir shops, bespoke tailors, opticians and massage parlours.

A colourful cluster of tuk-tuks was waiting for passengers disembarking from the ferry and we were soon putt-putting our way south along the town’s only main road towards our hotel, the Lanta Sands Resort on beautiful Phra Ae Beach, one of the many palm tree backed stretches of sand on the island’s west coast. These beaches are always peaceful, even in the February peak season, something that makes Koh Lanta such an appealing destination for those wanting to relax and escape Thailand’s tourist crowds.

We found that these west coast beaches, famed for their sunsets, were perfect for swimming and there were good snorkeling opportunities on the nearby small islands. There were some outstanding seafood restaurants, many of which also served a local favourite meat dish, the ‘massaman’ curry. The word ‘massaman’ is generally thought to refer to Muslims and this is a dish heavily influenced by Malay and Indian cuisine.

Koh Lanta is quite close to the Thailand’s southern border with Malaysia and there is a large Muslim population on the island. The average tourist is scarcely aware of this Muslim population other than seeing some women wearing head scarves and being woken up at dawn by the early morning call to prayer.

There is plenty to see and do on Koh Lanta and one of the most interesting expeditions is a voyage through the extensive mangrove forest that extends from the channel between the two islands. Kayaks are available but we chose a long-tail boat, which came with an expert guide.

After entering the maze of narrow channels at low tide, with the tangle of mangrove tree roots exposed, the engine was turned off and we paddled silently through the trees. There were no human sounds and we just had birds, colourful snakes (slumbering in the tree branches), scuttling crabs and chattering monkeys for company.

Mangrove trees actually grow in salt or brackish water in tropical countries and protect the shoreline. They are home to a rich eco-system both above and below water, with shrimps and many species of small fish enjoying the protection from predators provided by the network of twisted roots.

Koh Lanta Yai’s east coast, lacking the striking beach landscapes of the west, is much quieter but culturally far more interesting. Our route to the east was by car through pristine jungle up to a summit point on the spine of the island, from where we could see the Krabi mainland on the horizon. Our driver insisted that we stop to watch a very agile monkey climb effortlessly up palm trees to harvest coconuts. Clearly the owner earned far more income from tourists observing his monkey’s nimble fingers picking coconuts, than from actually selling the fruits to the public!

Lanta Old Town, further down the east coast, was once the island’s main port of trade. Now, this charming little settlement looks and feels like it has stood still in time. Its sleepy main street is distinctly Chinese, with neat colourful wooden houses and an interesting range of shops selling original hand crafted souvenirs for the more discerning visitors – even hammocks!

We decided to have lunch in this wonderful old town and chose a restaurant on stilts overlooking the harbour. We were rewarded with a meal of crisp, crunchy spring rolls, a spicy fish soup with coconut and an unbelievably scrumptious Thai crab omelette (another favourite local dish).

To complete our east coast tour, we ventured further south, almost to the southern tip of the island to Sang-ga-u, the Sea Gypsy Village.

Correctly known as the Chao-Ley, these people, some of whom are still nomadic, live in small groups along the edge of the Andaman Sea from Myanmar down to Malaysia. Because their language is only spoken, there is nothing written down to verify their origins. Only anecdotes and historical legends give a clue to their past.

They are animists, believe in spirit worship and are skilled fishermen and excellent underwater divers. We didn’t stay long in the village nor did we make any contact with the people themselves. These indigenous folk have already been evicted from some of their natural fishing grounds, been forced to settle in particular locations and have suffered from erosion of their unique culture. Now, sadly, the latest threats to their way of life are intrusions from unsympathetic tourist groups – people peering into their homes and asking them to perform their traditional songs and music.

Maybe the damage to the unique culture of the Sea Gypsies is symptomatic of the possible fate of Koh Lanta itself. Many parts of Krabi Province are already overburdened with tacky developments that threaten the region’s spectacular natural beauty.

Because access is only by passenger and car ferries, Koh Lanta has become Krabi’s last great escape. However, recent infrastructure improvements (including a bridge between Koh Lanta Noi and Yai) are deliberately aimed at attracting new developments and more tourists. So if you are a serenity seeker and would like to enjoy the quiet nature of this laid-back tropical paradise, you would be advised to make your journey to this special place very soon!

Nigel Wright and his wife Sue moved to Portugal 13 years ago and live near Guia. They lived and worked in the Far East and Middle East during the 1980s and 90s, and although now retired, still continue to travel and seek out new cultural experiences. His other interests include tennis, gardening and photography. 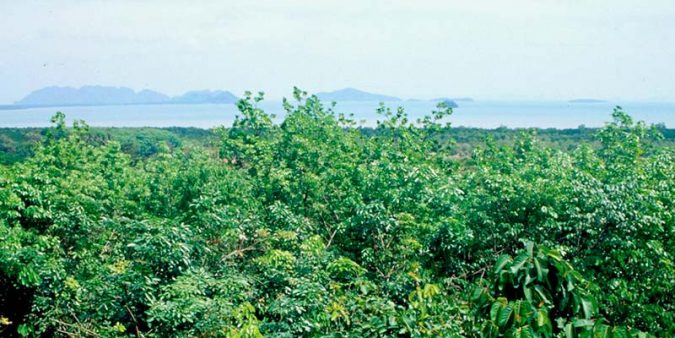