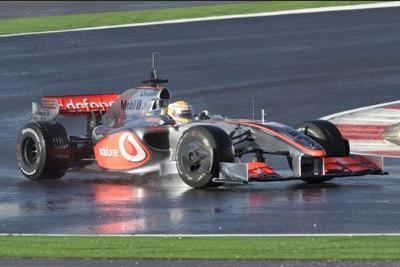 World champion Lewis Hamilton’s arrival in the Algarve last week was accompanied by intermittent sunshine, although worsening weather conditions later led to the abandonment of F1 testing at the Motor Park by the final day.

None the less, the 24-year-old Briton, a regular visitor to the Portimão area where his father Anthony has a house, expressed himself more than happy with the racing. “This is a great circuit providing fantastic conditions,” Hamilton said.

Before going on to chat with Portuguese Sports Minister Laurentino Dias, who played down the likelihood of the country making a return to the Grand Prix calendar, the McLaren ace commented further on his 81 completed laps of the new Algarve race track: “I’m pleased to report that the car feels good, we’ve made lots of progress over the winter and I’m looking forward to developing the car further, ahead of the Australian GP (March 29). With the limitations on testing during the season, and the few sessions we have remaining over the next two months, this is going to be an intense time and absolutely critical for every team.”

Hamilton’s Algarve outing was slightly curtailed when his latest model MP4-24 racing machine experienced what technicians described as ‘a precautionary engine system shutdown’ and had to be brought back in on the back of a truck. The current F1 title holder still managed to set the second-fastest lap time of the 2009 specification cars on view as opposed to former team mate Fernando Alonso whose Renault proved the slowest over 86 completed laps.

As the teams made way for official Superbike/Sport testing last weekend (see below), Formula One fans were encouraged by the sight of the bulk of McLaren’s equipment remaining under lock and key in Portimão in readiness for the team’s return to the Algarve for further private testing this week.

Prior to that event the Motor Park action made the smooth transition to two wheels with the latest motorbikes taking turns on the track during intense sessions lasting from 8.30am to late, Friday, Saturday and Sunday afternoon. The exercise was particularly gratifying for the Parkalgar Honda home team, freshly returned from three day’s preparation in the south of Spain. Although wind and rain once more played a major role, drier conditions on the second day allowed Albufeira’s Miguel Praia to claim fourth place with a scorching 1m45.214 lap time while Parkalgar team mate Eugene Laverty was not far behind in sixth. The pair sandwiched 2008 Supersport world champion Andrew Pitt in fifth, and left the Portimão-based team, as the only one other than seven-time championship winners Ten Kate Honda to have two riders in the top six, in great heart.

Team manager Simon Buckmaster added: “We are going to Australia in a very positive frame of mind and intend to be challenging for the 2009 title from the moment the lights go out.”

In the more powerful Superbike class, British Ducati rider Shane Byrne also made the most of Saturday’s brief dry spell by improving the 4.592km Motor Park lap record set by Troy Bayliss last November to 1m43.294. The world Superbike championship will return to the Algarve for its last race of the season on October 25 by which time the Parkalgar racers will hopefully have accumulated enough points at exotic locations ranging from Qatar to Salt Lake City and South Africa’s Kyalami to be competing for a podium finish.

Do you have a view on this story? Email: sport@algarveresident.com
1″>news