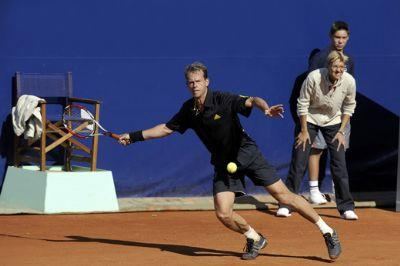 The Vale do Lobo Grand Champions Caixa Geral de Depósitos tournament, to be held between August 11 and 14, will once again include some of the most famous international tennis players in the history of the sport.

Former world number one Stefan Edberg is this year’s new player, alongside other names such as Britain’s Greg Rusedski and reigning champion Chile’s Marcelo Rios.

German Marc Goellner will also be playing in the Vale do Lobo tournament for the first time this year.

This tournament, which has a slogan The rivalry of the 80s, will also include Henri Leconte from France, Fernando Meligeni from Brazil and Portugal’s Nuno Marques and Swede Mats Wilander.

British player Chris Wilkinson has again been chosen as the reserve player for this year’s tournament.

Diogo Gaspar Ferreira, chief executive of Vale do Lobo, said: “This is the ninth edition of this tournament, which draws large international crowds. It has grown and as well as being a competitive event, it is also hugely entertaining and brings many families.”

Pedro Frazão from Premier Sports said he was amazed at how this event has grown in its nine year history and hopes that for the 10th anniversary, the national tourism board will support the tournament and include it in the annual Allgarve events programme.

Loulé Câmara spokesman Paulo Bernardo said: “The Câmara is proud to support this great event once again, which has both national and international appeal and brings quality to the tourist offer of the council.”

For more information about the Vale do Lobo Grand Champions Caixa Geral de Depósitos, please visit the website, available in English and Portuguese at www.grandchampions.org  or telephone 289 357 850. Tickets for the matches start at 17 euros.
1″>news