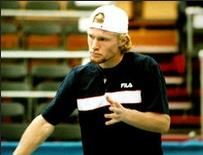 TIM HENMAN’S Australian Open challenge was ended at the first hurdle by his Wimbledon conqueror Dmitry Tursunov, crumbling to a 7-5, 3-6, 4-6, 5-7 defeat. British compatriot, Andy Murray didn’t fare much better, exiting the competition after a tame loss to Chela.

Federer experienced a setback in his preparations last week, when he was surprisingly beaten by Germany’s Tommy Haas in the Kooyong Classic. The tournament was won by Roddick. Fellow American James Blake took the Sydney International, where Justine Henin-Haardenne posted her credentials by winning the women’s event. Mauresmo exited the same tournament in round two, beaten 6-3,7-5 by promising Serb Ana Ivanovic. Martina Hingis, on the comeback trail, is struggling to achieve match fitness.

Teenager Sesil Karatantcheva who impressed during last year’s French Open, has been found guilty of nandrolone abuse and banned for two years. The Bulgarian will only be 18 when entitled to return to the tour.