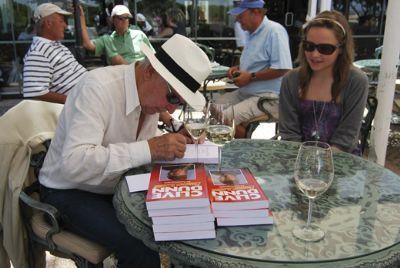 A charity day on May 30 organised by the Wolf Valley Charity Fund (WVCF) raised 40,000 euros for local charities, bringing the grand total of all money raised by the fund to 620,000 euros over the past 10 years.

During the day, funds were raised by members and visitors who took part in a putting competition and tombola with more than 200 prizes up for grabs.

Paintings, jewellery, books and Christmas cards were all available to buy throughout the day.

However, a highlight was the removal of the beard of the WVCF President Brian Smith.  Hairdresser Peter Dellicompagni took charge of the clippers and the beard fund added a further 1,165 euros to the overall total.

Some 142 golfers took to the Royal and Ocean courses in Vale do Lobo as part of the charity day events, with Ian and Jill Croft winning the four ball better ball Stableford completion on the Royal course and Heinke Gummert and Peter Twardawa took first place on the Ocean course.

It was a quick change into evening wear for everyone attending the cocktail and dinner party with food by Dona Filipa later that evening.

After a raffle and food, Rosemary Conley took control of the charity auction which saw prizes including cruises and golf lessons with top Portuguese golfer Adérita Silva going to the highest bidders.

“The success of the charity day was due to the overwhelming support of the Vale do Lobo group of companies as well as corporate and other sponsors, patron, programme advertisers, donors, the WVCF committee and the Vale do Lobo residents,” said Brian Smith.

For further information about the WVCF, please contact Brian Smith by calling 289 394 716 or email wolfvc@yahoo.com