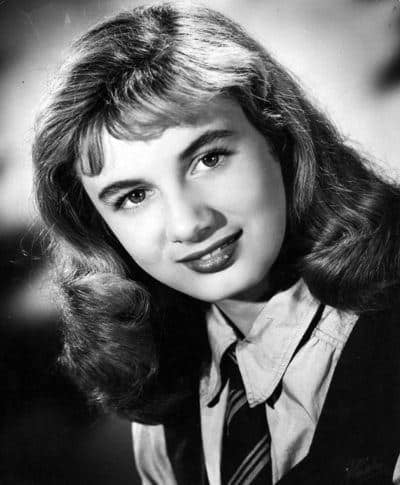 When the whole Jimmy Savile exposé hit the newspaper, headlines and our television screens were full of his image – I’m sure I was not the only one who felt saddened by his now tarnished image.

I never particularly liked the man as an entertainer, but I did admire his charity work and the great happiness he seemed to bring to so many children.

It’s always sad when someone falls off their pedestal, but why am I not surprised? Because I was a teenager through those years in the late 50s and 60s, I lived in London and I experienced more than my fair share of gropers and exhibitionists.

At the age of 13, I attended a school in Golders Green, a theatre school. This is a photograph of me in my school uniform, kept on the office wall of the agency for clients to see, sent to TV studios, modelling agencies and placed in Spotlight, the theatrical magazine listing all actors or at least would-be actors hoping for work. Who would want to hurt such an innocent looking young girl? Plenty I can assure you.

I was sent regularly on auditions to central London, travelling mostly by underground and alone. I learned how to put up with ‘flashers’ wearing trench coats, had men regularly sitting in the opposite seat with their hand in their pocket or worse and licking their lips suggestively at me.

Strap-hanging in the busy rush hour, hands were either groping some part of my anatomy or loins being thrust at my rear.

Whenever possible, I would go and sit next to an elderly woman and whisper to her that ‘that man is doing bad things’. One glare from her would usually send the pervert on his way. On one occasion, when I was being bothered, I got off the train only to find he followed me, which was terrifying as the platform was empty and I had to run. Thankfully someone came onto the station and he gave up the chase. I never did that again I learned to just move further down the car.

You may wonder why I didn’t report all this, but we girls had discussed similar experiences at school and one of them had done just that. She lived at the end of a line and the same man regularly travelled on the train.

She reported him to the station master and he was arrested. There was a court case where she had to appear as a witness at a young and tender age. Standing in the dock she had to describe what his genitals looked like and what state of arousal he had reached.

She didn’t understand the questions, never mind give answers with the man’s wife in court crying hysterically about her husband’s innocence. My friend was in a terrible state afterwards and as he got off with only a warning, we all decided it wasn’t worth reporting anything.

When I think about it now, I had some very narrow escapes and probably grew up too quickly as a result.

At the age of 17, I joined a touring show of the Desert Song, a popular musical of its time. The star was an idol of the day and his worshipping fans hung around the stage-door every night. He never gave up trying to get me to share his hotel room with him from day one of rehearsals and gave me a punishing time during the show because I refused.

Thank goodness I did, because whilst we were on tour, he would take his pick of the girls hanging around after the show and we would often hear screams coming from his dressing room, which nobody ever did anything about.

Why am I reliving all this? Simply because there now seems to be a witch-hunt on to discover, name and, more importantly, sue any popular artist of the time.

Were these women really damaged by their experiences of 40 or more years ago or opportunists? Some were quite certainly, but how easy is it to sully a dead man’s name and sue his estate or the TV companies when there are rich pickings and the accused is dead? Not that I now doubt that Jimmy Savile abused his position of trust as there has been a burden of proof uncovered to prove it now.

My poor school friend who went to court might well have been damaged. Who should she sue – the London underground for lack of vigilance or the courts that put her through such an experience and put us all off reporting this behaviour?

It was different with TV and live shows with big pop stars. I saw the way that very young teenagers behaved on full view of the TV cameras beamed into our homes. Their one ambition was to get into the stars’ dressing room. They were provocative and definitely knew what they wanted – should the object of their desires be hounded now they are all old men because they gave the girls what they wanted at the time?

I’ve seen film footage of Frank Sinatra’s fans: I wonder how many underage teenagers he bedded … now there’s an estate some great-granny could sue for!

Has anything changed? Don’t we still see young girls out to get a pop-star or football player prepared to do anything in the hope that they will snare them into marriage, then cry rape when they turn out to be just another one-night stand with no gold band at the end?

It’s been a long time since I got groped in the underground. I didn’t know it damaged me forever. Maybe that’s why I’ve made mistakes in my life – perhaps I’d better check with a lawyer and find who I can sue to keep me now in my old age …