Portugal Resident
Home Original Teaching the body to heal itself 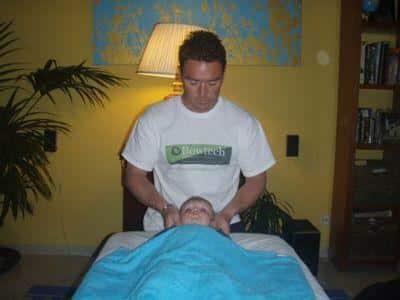 Patrick Matthews moved to the Algarve in 2003 and has been practising the Bowen Technique across the region since he arrived.

The technique was first developed in the 1950s by the late Tom Bowen.

Practitioners use gentle rolling movements on patients to stimulate the brain into resetting the autonomous nervous system.

The system works subconsciously to act on the area that needs to be healed, effectively allowing the body to heal itself.

Although the Bowen Technique can treat a myriad of problems, the most common seen by Patrick include problems caused by car accidents, swellings, migraines, infections and back, hip and sciatica issues.

“The technique works with the auto immune system and teaches the body how to forget problems. Most cases can be solved in two to four treatments and if the patient has no pain for seven days after the last session then usually they never suffer from this ailment ever again,” said Patrick Matthews.

He was invited to assist the physiotherapy department of the Barlavento Hospital in Portimão after hundreds of patients that were unable to be treated by the department turned to the Bowen Technique for solutions.

“Miguel Arez from the department asked me to come and work on specific cases that they were unable to help with and I now deal with patients throughout Portugal because of this, including footballers in Lisbon,” he said.