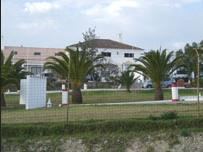 CHILDREN AND teachers at the International School of the Algarve in Porches, Lagoa, who were tested for tuberculosis last week after a teacher was diagnosed with the contagious disease, have not tested positive.

João Dias, a member of the board of directors of the school (ECUBAL SA), told The Resident: “So far, we have had no positive cases”, adding that all the results should be available on Friday. Each test is being carried out carefully “case by case”, said Mr Dias, “to be sure”.

The Resident spoke to Dr Teresa Pereira, who is also the deputy to the Lagoa health delegate and the doctor in charge at the Centro de Diagnóstico Pneumológico, a pulmonary diagnostic centre based in Silves.

She led the team of doctors screening children and teachers at the school. “All is okay according to the first test results we received.” She added that some tests were still being studied “namely the phlegm tests of some of the children. Although we are in a waiting stage, for the time being nothing has been detected”.

When Dr Pereira and her team were notified about the teacher’s tuberculosis diagnosis two weeks ago, she said: “We immediately contacted the school for an emergency meeting to underline a plan of action on how to test the children who may have been in close contact with the teacher.” She added: “Parents were contacted by phone on Monday (February 25) for a meeting on Tuesday and the screening tests started on Wednesday.”

According to national health protocols, the priority in these cases is to immediately screen all the people who had direct contact with the patient and these are the students and the remaining staff.

The school’s headmaster John Butterworth told The Resident: “To have informed all parents and screened all the pupils, according to health officials, would have been completely unnecessary as well as being wasteful of the time of medical staff and the limited resources they have available”. He added: “Here in school, the children tested were just the pupils taught by this particular teacher and who had therefore been in close contact with her”.

“I am pleased to be able to report that all skin tests were negative,” he said.

Mr Butterworth said that he would like to extend “a word of praise for the prompt, professional and entirely correct actions of the health authorities in this case”.

Meanwhile, the former teacher who was diagnosed with tuberculosis around two weeks ago is undergoing treatment in quarantine that could last several months. Her family has also been screened but none has tested positive.