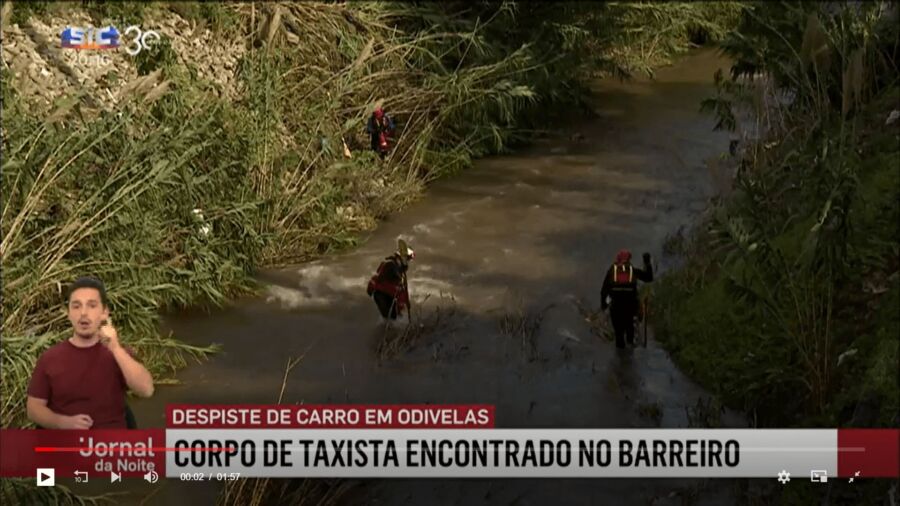 A 63-year-old taxi driver died in the early hours of Saturday morning after the car he was driving came off the road, disappearing into the fast-moving waters of Odivelas river.

Authorities have insisted the place where Belarmino Silva left the road is not an accident blackspot. But within an hour another car suffered exactly the same fate, fortunately with no serious consequences for the driver involved.

As it was, Belarmino Silva was transporting a passenger who miraculously was saved by the brave actions of a PSP agent who jumped into the water to rescue him.

According to reports, the agent “could not reach Belarmino” who then “disappeared in the current and the darkness”.

The tragedy was compounded by the fact that the accidents happened in pitch darkness.

The first incident was logged by authorities at 2am. The second “less than an hour later”, said SIC television news.

Firefighters were on the scene very quickly. There was even the agonising admission that communication with the taxi driver was established “and then he stopped answering”.

Searches went on through the night and into Sunday morning.

Belarmino Silva’s body was finally discovered by local people in Barreiro (south of Lisbon). It had been carried for roughly 40 kms.

This was just one of the many weather-related incidents that peppered the night of Saturday to Sunday as heavy rains have been keeping authorities on their toes.

Reports describe 73 trees falling, 21 ‘structures’ (hoardings, etc.) being blown off their supports, and 72 incidents of flooding. Further incidents were called in between Sunday through to the early hours of this morning.

Multiple districts remain on orange alert, some until 3pm today, others until midnight, while rivers throughout the country are becoming very fast moving, and thus to be avoided.

Meantime, locals in the area of Odivelas where Saturday’s accidents took place are clamouring for the reinforcement of protection: not simply to stop vehicles falling into the river, but to avoid potential flooding.

Locals have told SIC television news that accidents at the spot are “frequent”, as it is a stretch of Ribeira da Póvoa that offers “no protection” in relation to the river.

“So many cars have fallen here”, one resident told the news channel. But the president of the local parish council, Rogério Breia (PS) “denies the record of more accidents like those that happened” on Saturday night.

According to Breia, the last accident he is aware of happening was in 2019, says SIC, who quoted him as saying it was impossible to erect a wall at the spot, to avoid properties being flooded.

An option that is more likely to be studied now, is ‘shortening the road’, he told SIC.