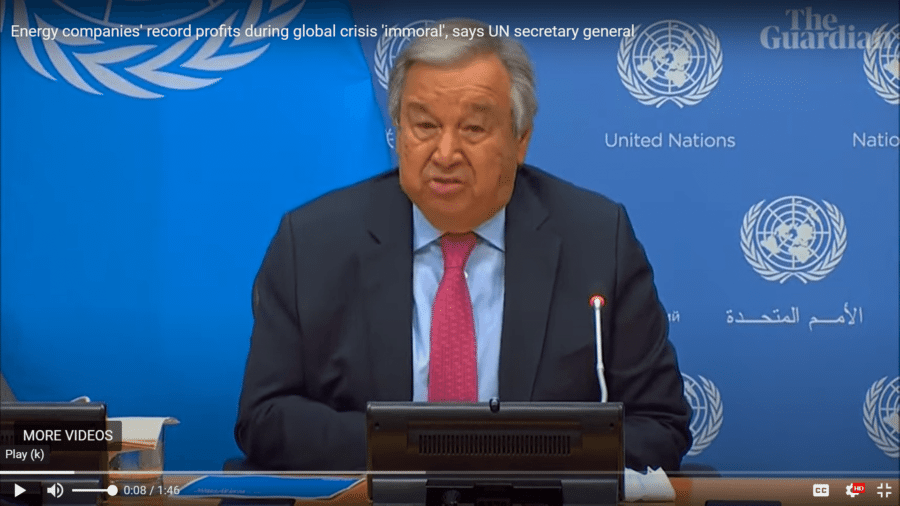 António Guterres, the Portuguese secretary-general of the United Nations, is calling on all governments to bring in windfall taxes on the “immoral” profits of oil and gas companies.

Talking in New York yesterday, he railed against the companies posting record financial results during the current energy crisis.

“This grotesque greed is punishing the poorest and most vulnerable people, while destroying our only common home, the planet,” he stressed.

By imposing more taxes on extraordinary profits being made, resources could be channeled to “support the most vulnerable people in these difficult times”.

To give an idea of the sums Mr Guterres was talking about, he said the combined profits of the largest global energy companies – just in the first quarter of this year – were approaching $100 billion (around €98 billion) – and this was AFTER they had wreaked further “massive cost to the climate.”

Earlier this week, BP was the latest fossil fuel giant to announce huge gains, revealing it had tripled its profits to nearly £7 billion in the second quarter of the year (around €8 billion) amid high oil prices during Russia’s invasion of Ukraine.

Guterres says these profits are unacceptable as “people around the world face financial ruin.

“Household budgets everywhere are feeling the pinch from high food, transport and energy prices, fuelled by climate breakdown and war.

“This threatens a starvation crisis for the poorest households, and severe cutbacks for those on average incomes.”

Alongside a windfall tax on excessive profits governments must do more to manage energy demand and accelerate transition to renewable energy sources, he urged.

Mr Guterres was speaking during the presentation of a third report prepared by UN experts on the global impact of the war in Ukraine, and which this time focused mainly on the energy sector, explains Lusa.

“Governments must expand and diversify supply chains for raw materials and renewable energy technologies,” he said.

“These must reduce bureaucracy for the energy transition and change fossil fuel subsidies to support vulnerable households and increase investments in renewable energy.”

In the face of the energy transition, Guterres called for more public and private investment and urged shareholders of development banks to “take on more risks and help countries move forward”.

The UN leader also pointed out that developing countries have every reason to invest in renewable energy, but lack the resources – while richer nations push them to make this transition, but do not give them enough technical and financial support.

“And some of these same developed countries are introducing universal subsidies on petrol stations, while others are reopening coal-fired power stations.

“It is hard to justify such measures, even temporarily,” he said.