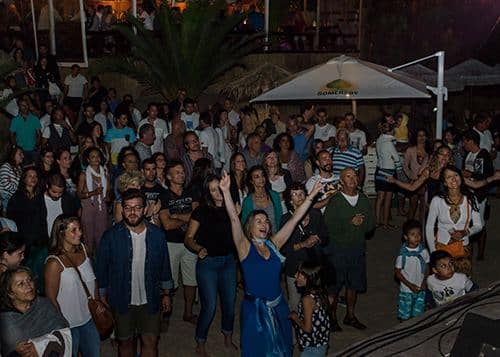 Dutchman Peter Dost and Portuguese Paula Ferreira have recently opened a wine and tapas bar on the left (northern) bank of the River Gilão in Tavira.

It is called Pessoa’s Café and it commands views of the so-called Roman bridge and the river, the clock tower of the church of Stª Maria, the Palácio da Galeria, the 19th century old market and the Jardim do Coreto.

Peter assured me that the bar was going to add to Tavira’s cultural life as he and Paula are planning events of music, storytelling, workshops and  book readings.

He is making links with local artists and already there is artwork on display inside the café.

For her day job, Paula Ferreira manages the Biblioteca Municipal Álvaro de Campos in Tavira where she sponsors a wide range of cultural events. She and Peter are hoping to create another focus for culture in the more informal riverside surroundings of Pessoa’s Café.

Peter and Paula met in 2009 when she was attending classes in Holland to learn Dutch and he was there for an e-learning project on behalf of the school he worked for.

His career was in teaching logistics and international trade. When Peter’s last contract ended, Paula suggested that he came to Portugal.

Arriving in Tavira in November 2011, he immediately fell in love with the place, as many people do.

The café is open seven days per week from midday to midnight.

Paula and Peter are keen to support Tavira and they source as much produce as they can from local suppliers. They serve sandwiches and inventive tapas such as toasted goat’s cheese with honey and salad and another of local chouriço, ham, cheese with dates, nuts, olives and salad. Their wines, of course, are Portuguese!

Paula and Peter are keen to call their place a café rather than a bar because as well as food they provide a wide range of good teas and hot chocolate. They are obviously keen to attract visitors in the winter as well as in the summer.

The café is located on Rua Jaques Pessoa, 22. I can recommend going at sunset and at high tide. Sipping a glass of wine and watching the fish leaping in the river on a warm evening, you might witness a golden sky gradually changing to red on the western horizon. What could be better?