A TAP travelled home to Lisbon today after an embarrassing hitch in a cargo flight out of Caracas, in Venezuela. Police with sniffer dogs turned up in force, and discovered more than 130 kgs of cocaine stashed in varous bags in the hold. The drugs had been missed in an earlier inspection. A Venezuelan police sergeant – said to have been working in the anti-drug unit – is believed to have been behind the traffickign operation. He is now being sought by authorities in Venezuela, while PJ police will be handling investigations ‘this end’. 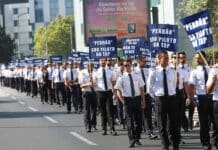