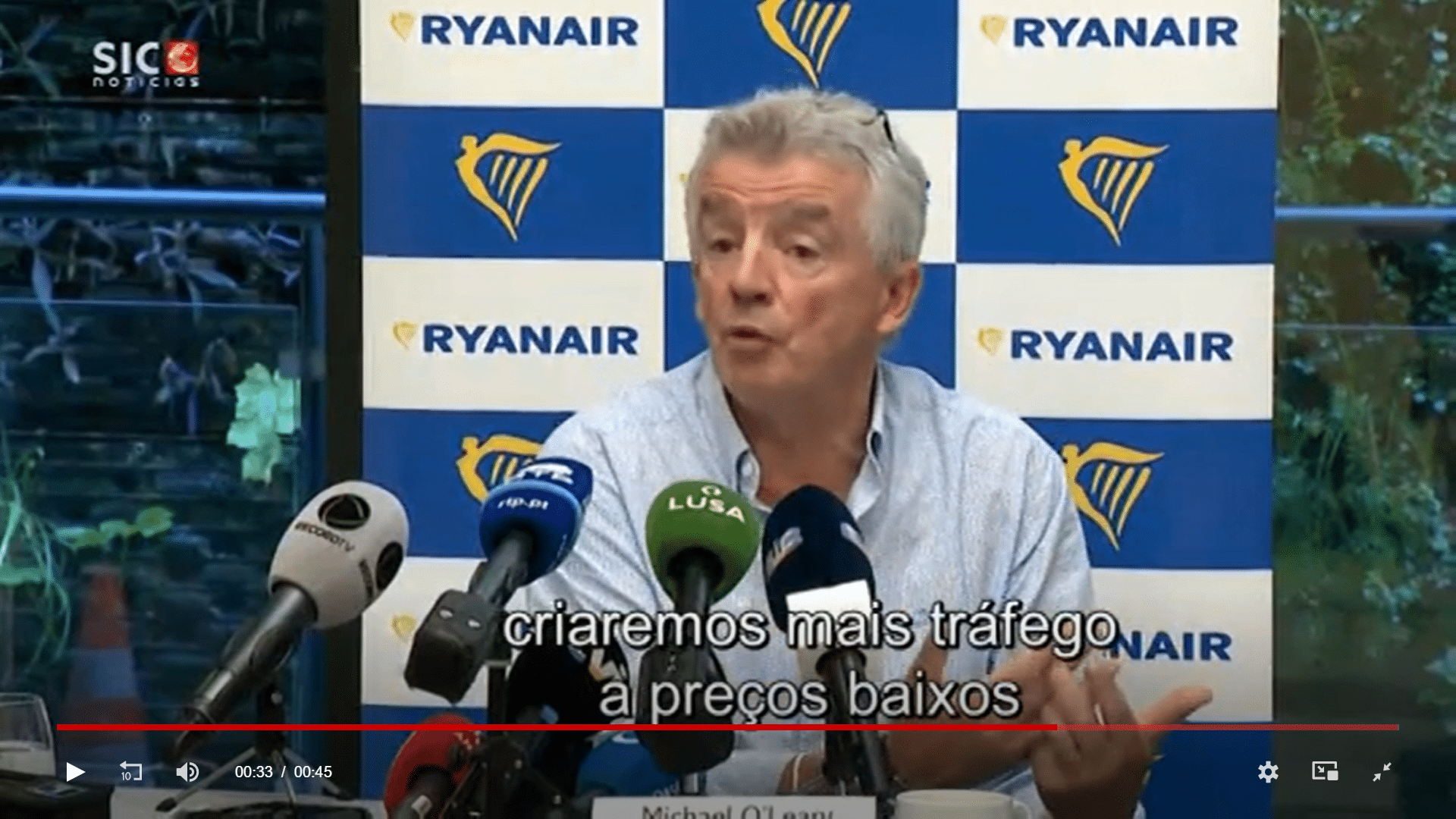 In another characteristic salvo of criticism, Ryanair president Michael O’Leary has returned to ‘TAP bashing’ in Lisbon today – claiming the company’s policy of blocking ‘slots’ at the capital’s airport is putting the brakes on Portugal’s post-pandemic recovery.

“We could put more planes in Lisbon, create more jobs, help Portugal grow and recover from the Covid-19 crisis more rapidly”, he told a press conference being widely featured.

“TAP is stopping other airlines from investing in Lisbon, artificially blocking ‘slots’ at Portela airport which could be used by other companies to bring more routes, and more traffic”, he railed.

Announcing 26 new routes into the country this winter – using all three main airports: Lisbon, Porto and Faro – Mr O’Leary says that his company’s plans for Portugal amount to a further investment of around €300 million.

Ryanair’s proposed expansion will create another 300 “well paid” jobs in Portugal, he said (divided between pilots, cabin crew and engineers) – and all this is being done ‘without State aid’.

This was the point where Mr O’Leary dived into Ryanair’s ‘bête noir’: the billions in State aid due to be ploughed into TAP, which he has likened before to ‘throwing taxpayers’ money down the toilet’ (click here).

As reports earlier this month have already explained, Ryanair is focused on its legal challenge of TAP’s State Aid (stressing that it contravenes European law surrounding competition. The European Court of Justice seems to have agreed (click here) The Portuguese government is now having to restate its case.

In the meantime, Ryanair has lodged a new complaint over the European Commission’s decision to approve ‘interim State Aid’ for TAP to the tune of €462 million (click here).

The situation has become further fraught as a result of gratuitous ‘insults’ exchanged between Mr O’Leary and Portugal’s infrastructures minister Pedro Nuno Santos.

As Lusa explains, the Portuguese government vehemently rejects Ryanair’s complaints. It maintains the money it wants to plough into TAP is “structuring”.

Official response has also complained that Ryanair is ‘taking advantage of a difficult situation’.

TAP’s recent history is chequered to say the least. In 2020 the airline returned to State control, already losing millions of euros (click here).

The lockdowns and travel bans of the pandemic have simply made everything a lot worse.

This was the main reason for the European Commission authorising State aid (now the subject to further scrutiny), as well as interim State Aid – but due to Ryanair’s litigation no-one quite knows what will happen next.

It could be coincidence, but Ryanair was in the Portuguese news yesterday over claims by an air-hostess (who wishes to remain anonymous click here).