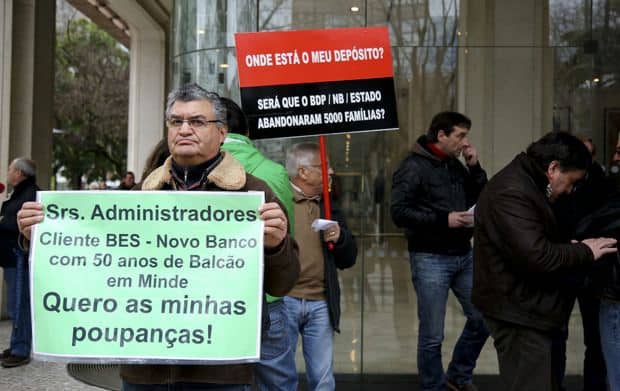 After the brouhaha of the last few days – and multiple calls for his resignation – Governor of the Bank of Portugal Carlos Costa is finally meeting with government representatives and market regulators to ‘debate a common line’ for the resolution of what in many cases is the terrible plight of 2,500 small investors caught out in the BES debacle.

As Diário de Notícias explains today, at least 530 million euros of everyday people’s hard-earned cash is involved – most of it consigned to oblivion by Costa’s ‘resolution’ of the third major Portuguese bank collapse under his watch (before Banif).

Multiple legal challenges have either already been presented through the courts, or are on their way – but Costa is “sitting firm”, says the paper, showing no sign of buckling under left wing pressure that has, at times, resorted to personal slants.

In December, Left Bloc firebrand Catarina Martins likened Costa to Mr Magoo – the blind Disney character dogged by accidents that he could not see coming.

And this week both prime minister António Costa and PS parliamentary leader Carlos César have added their condemnation over Carlos Costa’s performance generally, suggesting the country is running out of confidence in the boss of its central bank.

But yesterday, right wingers and other members of the financial establishment went on the attack, saying it was “shameful” to have denigrated Costa so publicly.

Former Bank of Portugal boss Miguel Beleza said the prime minister’s words were “not good” and that the central bank is independent – a fact at the centre of left wing concerns.

“I don’t like hearing these kinds of declarations about the Bank of Portugal,” he told Dinheiro Vivo.

PSD critics too have been vociferous, calling government jibes attempts to “asphyxiate democracy”.

But, for now at least, negotiations towards brokering some kind of deal for the thousands who have lost their life savings seem to be in the pipeline.