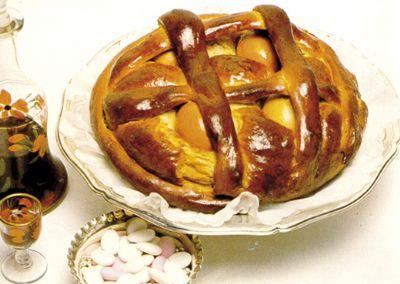 The Algarve is famed for its delicious sweets made with almonds, figs and carobs, which are rooted in the region’s rich Arabic history.

Egg yolk is also an important part of regional sweets, often being cooked in sugar syrup to make egg strings used in Dom Rodrigos and to fill sculpted almond sweets. This year, why not try some of the following traditional Algarve recipes for your Easter table?

If Portugal’s Easter food could be characterised by one recipe, it would probably be the Folar. This is a sweet  bread made from a simple dough often containing eggs, flour, milk, yeast, sugar and olive oil and is usually topped with either two or four hard boiled eggs, each covered in a cross made of dough.

Eaten fresh it makes an ideal end to an Easter lunch served with tea or coffee or it can be served at breakfast lightly toasted with butter.

2 or 4 hard boiled eggs, still in their shells

In a bowl, mix the yeast with a quarter of the flour and a third of the milk, before mixing in half the sugar. Mix and cover before leaving in a warm place to rise for around 30 minutes. Meanwhile, beat the egg with the remaining milk and sugar, salt and spices. Gradually add the flour and work the dough for a few minutes. Add the softened butter and work again. Mix the yeast mixture into the dough and knead well. When ready, it should not stick to the sides of the bowl. Cover and leave in a warm place to rise for around three hours.

On a floured surface, shape one big or two smaller round loaves and place the boiled eggs on top, secured with two strips of dough, forming a cross. Brush the folar with beaten egg and bake in a hot oven (210˚C) until nicely brown.

Figs are a regional speciality, which can be used whole, pureed, dried and even toasted in the oven to make rich sweets and cakes.

In this recipe the figs are mixed with powdered almonds, chocolate and sugar to make a dark, dense and sticky cake.

Grated peel from half a lemon

In a pan, place the water, sugar, cinnamon, lemon peel, aniseed and chocolate powder and cook on a medium heat until it becomes a thick syrup.

Remove the pan from the heat and sprinkle the caster sugar on a board or clean kitchen worktop before pouring the mixture on top and allowing to cool.

Once cooled, mould the mixture in cheese shaped rounds, ensuring that there is caster sugar all around it. This can then be wrapped in cling film and kept in a cool dark cupboard for several months, or eaten straight away!

Sweet rice pudding with cinnamon is often served as a delicious dessert at the end of Easter lunch in Portugal. Make sure that you buy the correct type of rice to make a thick, soft and creamy dessert.

Peel of one lemon

A pinch of salt

Water (twice the amount of rice)

Put the rice in a pan with boiling water, the lemon peel, salt and cinnamon stick to simmer. Stir every so often so that it does not stick to the pan. When the rice begins to split open, add the butter and stir in the milk, bit by bit until the rice is cooked.

Take the pan off the heat and add the sugar and egg yolks and stir in quickly.

Remove the lemon peel and cinnamon stick and divide the rice pudding into individual dishes or one large dish. Sprinkle the cinnamon powder over the top and serve warm or keep in the fridge until ready to serve.