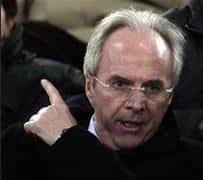 ENGLAND FOOTBALL manager and former Benfica coach, Sven-Göran Eriksson, recently received news that his sports and leisure resort, planned for construction in the western Algarve, has been declared as being of Potencial Interesse Nacional (PIN), meaning it is a project of potential national interest.

Although, initially, it appeared that the authorities were not in favour of the development, a presentation given by Lagos Câmara succeeded in changing the government’s decision.

Sven’s resort represents an investment of more than 50 million euros and, with its new PIN status, the project is likely to be fastracked through the licensing process, meaning it will not suffer the usual bureaucratic delays often experienced by less high profile projects. Júlio Barroso, President of Lagos Câmara, commented: “A very important step has been taken forward with this project, which is of great interest for the borough and for the Algarve.”

Barroso stated that the evaluation commission for awarding PIN status to projects failed Sven’s resort back in January. Concerned that the borough would lose an investment worth 50 million euros, Lagos Câmara went ahead with a series of presentations given to the referred commission, the government and various other entities, in order to have the decision overturned.

As a result, the government compiled a report pointing out the strategic importance of the project in terms of promotion of quality tourism, creation of jobs and its reinvigorating potential in a rather rundown part of the  interior Algarve. The document was clearly persuasive and succeeded in changing the views of the evaluation commission.

The project has a strong sports emphasis and will be built in Herdade Corte do Bispo, an area measuring around six square kilometres, in the parish of Bensafrim, Lagos. Due to the unparalleled facilities planned at the resort, the council is confidently speaking about the project as a future reference throughout the Iberian Peninsula and even throughout the world.

The resort will provide the necessary facilities to attract international sports teams to train in the Algarve. There will be no less than nine football pitches, two half pitches for training purposes and a central stadium-style area with seating. As well as a hotel, a sports village and clinic, an athletics track, golf course and tennis courts also feature in the plans. It is estimated that the development will create at least 350 new jobs.

Promoters of the project will soon travel to Lagos to deliver a public presentation of the project, however, Eriksson is not expected to attend.