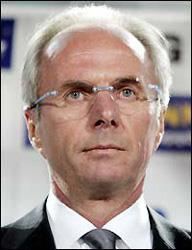 SO, IT has been decided. Sven-Göran Eriksson’s latest escapade proved to be the straw that broke the camel’s back. The English FA, and their scandal-prone manager, have decided to put an end to the Swede’s five-year reign after the conclusion of the current World Cup campaign. A sweetener in the region of five million euros will make the parting palatable for all concerned, but what of the future?

The 57-year-old manager with a roving eye is adamant that his ‘playing’ days are far from over, and the vacant Real Madrid position seems predestined for the former Benfica and Lazio coach, especially if a respectable result can be achieved in Germany. As for England, the dog and his grandmother are being bandied about as potential successors come July.

Right-hand man and Middlesbrough manager Steve McClaren, Bolton’s Sam Allardice, Charlton’s Alan Curbishley, and even Manchester City boss Stuart Pierce, head up bookie’s lists. None of these, however, command the necessary international experience, or status, to be seriously considered.

Former incumbents Glenn Hoddle, Terry Venables or Bobby Robson would represent a fatal step backwards, Martin O’Neill and George Graham do not fit into the required profile, while someone like José Mourinho is just too controversial, even if willing and able, to come into the equation. Whom does that leave?

Australia’s Dutch manager, Guus Hiddink, and Portugal’s Brazilian supreme, Luis Filipe Scolari, have been mentioned, but, quite frankly, I can see neither becoming a success in England. Sir Trevor Brooking may be an interim solution, but there is only one man who can do the job, and all should be done to persuade him to take it on: Arsene Wenger. The Arsenal manager possesses all the qualities to take over and polish up Mr Eriksson’s legacy.