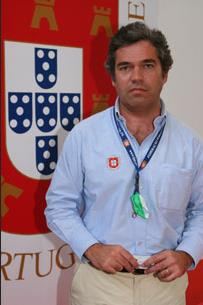 GOLF REPRESENTS 15 per cent of Portugal’s total receipts from tourism and two per cent of its GDP and is becoming an increasingly important sector for the leisure industry market and the economy as a whole.

“These are impressive figures and both political authorities and business leaders are ever more conscious of its importance to the national economy,” said Pedro Vicente, Secretary General of the Portuguese Golf Federation, Federação Portuguesa de Golf – FPG.

Pedro Vicente, talking to The Resident at the first Portugal Golf Show held on Friday, Saturday and Sunday at Lisbon’s Congress Centre in Alcântara, explained that this is the first international golf fair to be held in Portugal and was an ambitious and challenging undertaking.

“We are positive that golf as a sport is and will continue to grow in Portugal, although what is important is that it grows in a sustained and planned way. We don’t expect nor want it to grow in a rapid and uncontrolled manner, as if by magic,” said Pedro Vicente.

Although competition in the international golf market was ferocious and could be potentially fatal, Portugal had a number of factors in its favour, including an attractive climate, good hotels and excellent infrastructure and services for golf, top quality golf courses, all contributing to making Portugal a reference worldwide in the sport.

“The Portuguese are increasingly discovering golf, although it wasn’t a sport traditionally associated with our people even though we’ve had golf in Portugal for over 100 years. It was traditionally aimed more at foreigners visiting or resident here,” he said.

However, the Portuguese were gradually coming to know the sport and become enthusiastic about it.

When it came to the Greater Lisbon area, Pedro Vicente admitted that golf hadn’t taken off so rapidly around the capital as it had in the Algarve and was somewhat “behind other parts of Portugal in this respect.”

“In recent years we have seen the sport spreading out with developments in Lisbon, Madeira, the Azores and Silver Coast and now to the north between Lisbon and Porto and not just the Algarve,” he said.

“I would say that there have been a number of interesting golf developments springing up within a 30km radius of the capital, ones that are of good quality so that Lisbon is now being seen as a centre of excellence and an alternative to the Algarve when it comes to this sport,” said Pedro Vicente, adding that golf was increasingly being incorporated as part of a package for short term corporate incentive breaks.

“Locally there have been three golf tournaments and a special Par 3 on the Tejo with the support of Lisboa Golf Coast we were able to invite golfers to play at a unique event in Lisbon,” he said.

Pedro Vicente added that Portugal will also host important European and International golf tournaments, such as the European Seniors Tournament in the Algarve and the European Boys Championships in 2011.

And was golf just a sport aimed at the rich? Pedro Vicente said that there were several interesting developments involving municipal councils to create public golf courses for those who didn’t have the financial means to play on large private golf courses.

The show itself had very clear goals: to hold a show in which all the players and retailers in the industry could participate and to increase the number of golfers in Portugal.

To that aim there were 90 exhibitors, 70 per cent national and 30 per cent international with loads of opportunities to practise ones putt.

“We hope to target the Portuguese public at large who may find this event a trigger to get them interested in starting to play the sport,” said Pedro Vicente.

“I suppose our main mission, apart from attracting more players and fans to the sport in Portugal, is to promote this country as a top quality golf destination worldwide, and in that I think we’re succeeding,” he said.