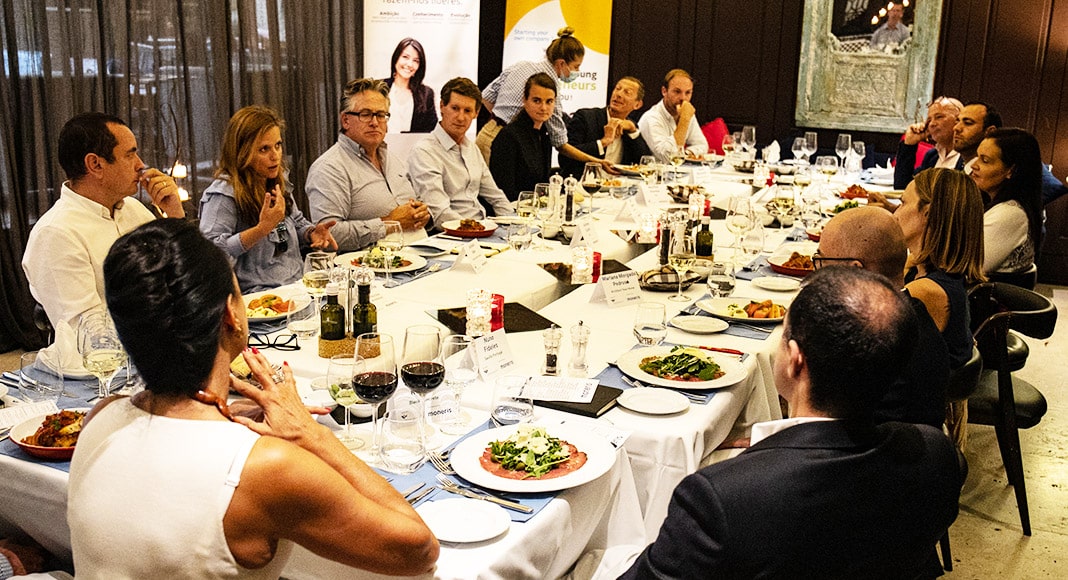 Greta Thunberg was present in spirit if not in person for the latest British-Portuguese Chamber of Commerce (BPCC) brainstorming think-tank lunch. With COP26 just around the corner, the topic was “Sustainable Development – are we taking it seriously enough or is it all just blah! blah! blah!?” – a title dreamed up by participant Andrew Coutts of ILM some weeks ago.

The young Swedish activist had taken to the Youth4Climate Summit stage in Milan a day before the BPCC Lisbon lunch, using a similar lexicon to lambast the “empty promises” of global leaders to address the climate emergency.

“Build back better. Blah, blah, blah. Green economy. Blah blah blah. Net zero by 2050. Blah, blah, blah,” Greta Thunberg said. Either Andrew Coutts is moonlighting as Greta’s speechwriter, or the point she was making is broadly in line with what the business community here in Portugal is already thinking.

And so began a discussion ranging from greenwashing to the high climatic cost of concrete and the need for new materials; the value of certification systems; the state of architectural education; and who should be driving change.

Rui Pedro Almeida, the CEO of Moneris and Chamber’s Chairman, who kindly sponsored the lunch, started things off with reference to the 17 UN Sustainable Development Goals (SDGs) and the rising importance to investors of Environmental, Social and corporate Governance (ESG).

“It’s about prosperity, planet and people,” Rui said, “within the need for growth, which is of course what all of us are interested in.” And he posed a question: “which is the driving force in change: politics, consumers or capital markets?”

Luís Silva, founding partner at Pedra Silva Architecture, began with an immediate answer: that the financial services markets are already pushing the process. “Green is no longer a nice-to-have but a must-have when investors ask for environmental compliance,” he told the round-table get-together of developers, architects, designers and entrepreneurs from different sectors, but all with overlapping interests.

“Banks are looking for and asking for compliance with BREEAM and LEED building rating systems,” Luís said, referring to the two internationally accepted codes that measure a building’s environmental responsibility.

Mariana Morgado Pedrosa from Architect Your Home is very much client-focussed and thinks there’s a need to make people more aware of the various possibilities of sustainable design. She called our attention to the fact cork is one of the few materials which actually has a negative carbon footprint.

Nuno Fideles from Savills agreed this process needs to start at the beginning and that clients and developers cannot “just ask for a certificate at the end and think that’s enough”. Nuno explained that environmental sustainability in construction needs to be baked in from the beginning and raised the issue of bureaucratic hurdles hindering the speed of regulatory change while trying to keep up with new sustainability focussed projects.

A striking headline figure from Pedro Clarke, a partner with A+ Architects, put the problem into stark context. “At least 8% of global emissions caused by humans come from the cement industry alone,” he explained, quoting a well-established and accepted figure that featured in a recent report in Nature magazine. When you consider that the aviation industry accounts for only 2.5% of emissions, it’s an eye-opening statistic. The answer is to either improve production methods or to look for alternatives.

As well as initiatives such as green concrete and biocrete, Pedro is focussing a lot of his current research on wood. He doesn’t think the BREEAM and LEED guidelines are enough as he believes they are dated and not adapting quickly enough. Apologising for plugging his podcast series “Another Brick in the Wall” which considers a new material each episode, Pedro said he believes wood is a solid, renewable alternative to concrete.

He highlighted an EU project for sustainable timber construction and work that is being done around the world to explore new and more sustainable building materials. Imperial College London published a white paper in June 2021 suggesting the use of alternative materials and carbon capture technologies is critical to decarbonising the cement industry.

But wood prices are going through the roof because of recent supply shortages caused by COVID-19 and other environmental impacts such as forest fires caused by extreme weather. It’s something everyone building at the moment knows about and hopes that – like inflation – it will be a short-term problem. For example, there are some indications that lumber prices are dropping in North America which has been the market driving price increases.

The discussion developed further with Cristina Amaral from Carlton International asking if bringing wood to Portugal from Scandinavia was a good solution, given the carbon footprint of the transport and whether the eucalyptus plantations can be replaced by something more suitable for the construction industry. Pedro Clarke responded that although eucalyptus grows fast and straight, the overall impact is negative because of the amount of water each tree needs, and that indigenous Portuguese pines are not ideally suited for construction.

Alastair Leithead from Vale das Estrelas in Odemira – a former BBC foreign correspondent turned off-grid pioneer (and your humble scribe), explained he had cut down two hectares of eucalyptus for a new building project based around taipa from his own land – the old Roman method of construction using clay and soil. The advantage is not only sustainability, but the thermal advantage of 65cm thick walls keeping buildings cool in the summer and warm in the winter. However, this traditional form of building struggles with the regulatory frameworks around thermal insulation and earthquake protection.

Pedro said it was worth looking at more closely, but Alastair raised some of the challenges at the local town hall level, with rules and regulations at odds with some of the big picture aspirations for climate change. This highlights a mismatch between the new ideas and their implementation amid complex, layered bureaucracy.

Seyed Azin Roshan from Black Concrete who has recently moved to Portugal from Dubai asked the crucial rhetorical question of whether wood could be used to build 30 story buildings – which of course it can’t.  This prompted Juliana Vale from the Juliana Vale Studio to ask if indeed we need tall buildings, but Azin mounted a strong defence in favour of going high rather than wide when considering growing populations and the sustainability benefits of many people living and working above a smaller footprint.

Martina Vranker posed the question of whether cork can be used. The young Slovenian architect was on the penultimate day of her six-month business exchange as part of the Erasmus for Young Entrepreneurs programme administered by the BPCC on behalf of the EU. Martina spent the fifth year of her architecture degree in Portugal and was back for hands-on experience and mentorship with a Portuguese Host Entrepreneur on how to successfully run her own business back home.

The Chamber has already overseen more than 35 similar exchanges between aspiring New Entrepreneurs from one European country with experienced mentoring Host Entrepreneurs in another European country. Fellow lunch participants, Pedro Clarke of A+ Architects and Xavier Beysecker from Maison Amerande have already participated as HEs in the programme. It’s a reminder of how architecture in Portugal is highly regarded internationally and is one of the fastest growing sectors, highlighting the appetite for creativity in sustainable building.

Cork is indeed a valuable renewable material not just for insulation, which is one of its current main uses, but also in structures. Carlton International’s Cristina Amaral mentioned Amorim Cork and their claim that the sobreiro staple of the Alentejo landscape is one of the very few carbon negative materials.

With an emphasis on sustainability in all sorts of business offerings, materials are becoming as important as concepts such as Andrew Coutts’ Tavira Wellness Village on which he worked with Catherine Hallahan of CHV & Partners. The Irish Health, Wellness and Property Entrepreneur – and connector who works between Portugal and the UK – believes there’s a lot of room for change, and sited their own project which aims to encompass many of the social aspects for a harmonious community spirit where inhabitants feel in tune with the architect’s ambitions.

Returning to the issue of who needs to be the driving force in bringing change, Xavier Beysecker brought this back to the clients and the education of those owners, developers, builders and investors who just don’t know which alternatives to the likes of concrete are readily available.

Pedro Clarke blames university architecture courses worldwide for being stuck in old fashioned “concrete is king” thinking, though Martina interjected that from her perspective practical, technical architectural teaching had indeed been at the core of her courses.

Phil Neate, founder of Vista Verde which provides low-energy luxury LEDs and interior design, believes government legislation is vital in pushing for change, but that consumer demand will drive it, which means increasing awareness of the alternatives. When he started his LED lighting company 10 years ago “people didn’t care about the wattage per square meter,” but that is now changing through regulations which set limits on energy use and put emphasis on efficiency. Countering what had been suggested earlier regarding the improbability of high-rise wooden constructions, he cited the example of Sweden’s 75-metre White Arkitekter building.

Luís Silva made the point that it’s all about money – change will only come when there’s a financial incentive, with Nuno Fideles from Savills speaking passionately about the challenges they had encountered and overcome. Rui Pedro Almeida pushed back, as he believes the Environmental, Social and corporate Governance (ESG) are now far more than just ‘greenwashing.’ He accepts there’s been a lot of that about, but these are now real rules that will make companies sit up, take note…and follow them.

As an architectural photographer and founder of Clear Space Photography, Ed Robinson sees a lot of change coming with the emphasis on sustainability and now feels inspired to build something for himself along similar lines.

A lively discussion rumbled well on into the afternoon and the BPCC CEO Chris Barton proudly announced that, once again, the Chamber had been able to bring together such an interesting and diverse group of people with varied perspectives in this latest in the series of brainstorming think-tank lunches.

Within hours of the event, we received multiple messages from the participants expressing what an enriching experience it had been for them and urging us to organise more of the same. Chamber members are encouraged to suggest other (quirky) themes which impact on the evolving business world.

* As always, many thanks to Andrea Almeida and her impeccable hospitality team and Manuel Rosa da Silva, managing partner of the Santiago de Alfama Hotel in Lisbon for providing the venue and a fantastic lunch.

* And thanks to Alastair Leithead for writing up the findings. Alastair left his career as a BBC foreign correspondent and war correspondent last year to live in rural Alentejo, and blogs every week on being Off-Grid and Ignorant in Portugal – please follow his blog and help him spread the word as he and his wife Ana build an off-grid tourist lodge and develop a podcast about Portuguese wine. 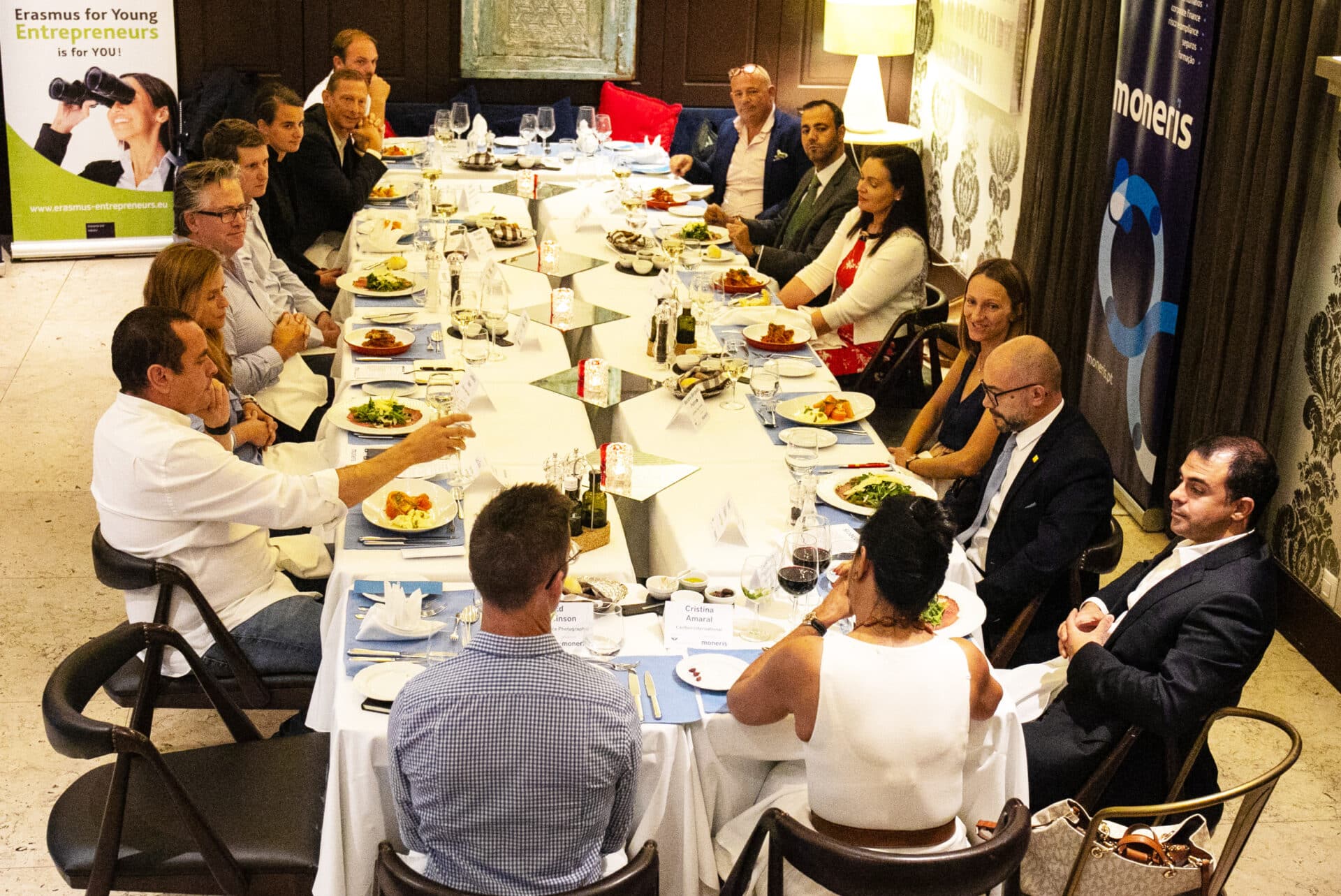 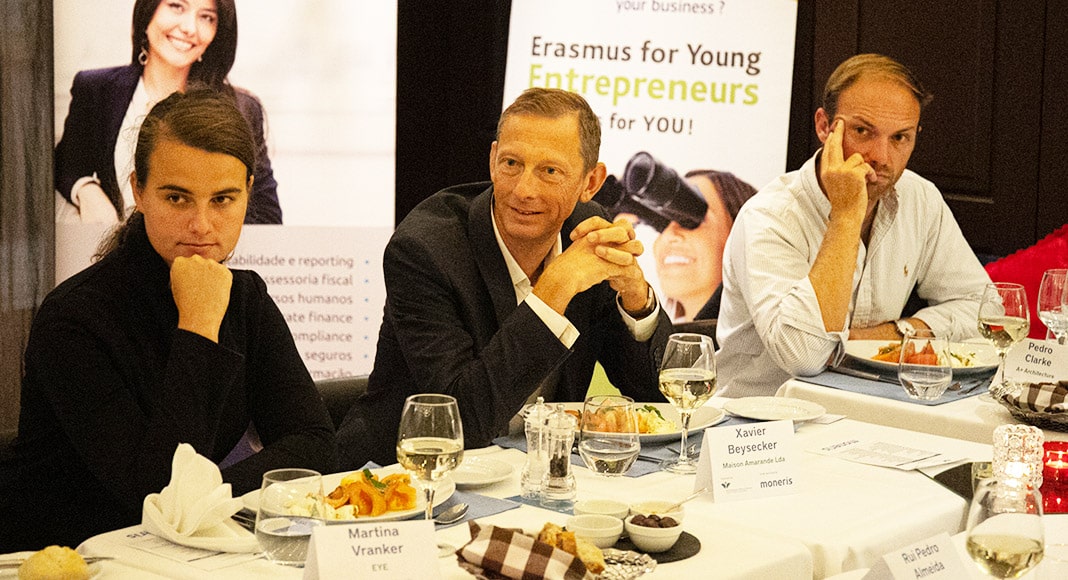