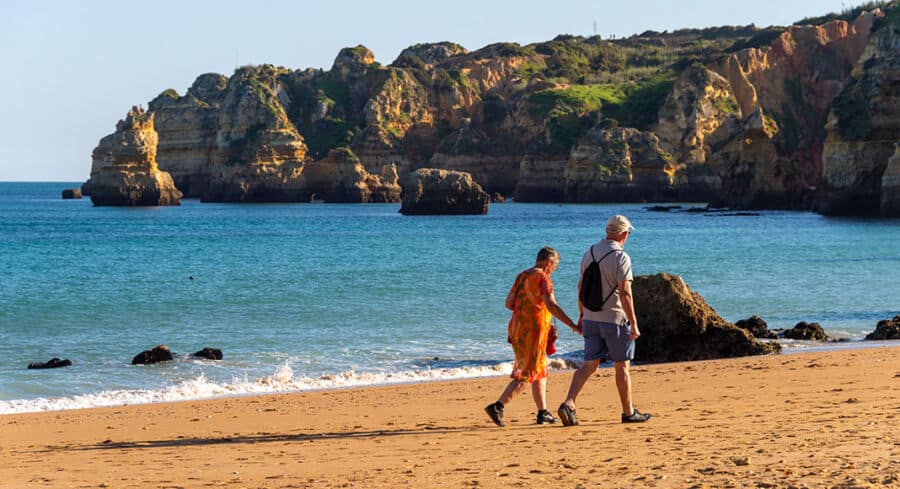 After two long and rewarding careers, Trevor and Susan decided they wanted to spend their autumn years in sunnier climes than North Lincolnshire.

After a discussion, the Algarve is where they landed upon. Looking back, it was the obvious choice. The married couple had spent more holidays there than either of them cared to remember. Tavira was their preferred coastal town to visit — and whenever they travelled to other countries, each place they visited was benchmarked against that town.

It felt the right time to retire. For the last 25 years, Trevor had owned his own car lot. It was named Rusty’s, due to the colour of his hair when he started the business. His hair’s grey now, but it’s still a good name. Trevor spent his younger years honing his craft as a salesman, before investing in a business of his own with the help of a partner.

Meanwhile, Susan, a classically trained pastry chef, sold cakes and bread on the internet. With the help her daughter, she set up an Instagram page, showcasing some of the many artisan delights that were on offer. Week on week, demand for the pastries grew. It got to the point where Susan had to employ the use of a family friend’s daughter.

Both businesses had done well. The couple enjoyed a healthy income and they’d managed to put away a sizeable amount. They’d been living in the same house in a village just outside Scunthorpe for 35 years now. In that time, they’d more or less completely overhauled the place. A new kitchen here, a loft extension there.
When it came to retiring time, the house was worth almost £750k. Trevor sold his shares in the car lot for a tidy sum. With those funds, their pensions, their savings, and the money Susan had made from her online pastry sales, they had more than enough for a happy retirement.

After a few months of searching and a weekend trip over to the Algarve, Trevor and Susan had found a modern two-bedroom apartment not too far from the centre of Tavira.

The place was small enough to warrant little cleaning but spacious enough to have their new friends over. The spare bedroom was there for when their daughter and fiancée wanted to visit. The cherry on the cake? A community swimming pool. It was perfect.

Putting an offer in was an easy process. Soon after, they had it accepted. Now the issue was to find a sensible way to transfer the money they had in pounds into euros, so they could pay property taxes, settle lawyer fees, and, of course, buy the property itself.

Hitherto, the couple had exchanged currencies through a bank whenever they went on holiday. They knew that this wasn’t the smartest way, but it was easy. They understood that banks seldom offered the best rates, but they felt this was a minor convenience on holiday.

When it came to moving substantial assets over to Portugal, they knew they’d have to take a different route. After working hard their whole lives, the last thing they wanted was to have the value of their money stripped away by poor exchange rates and hidden fees.

What’s more, they hadn’t yet set up a Portuguese bank account. If they were going to transfer currencies, they’d need somewhere to transfer them to.

In the midst of thinking out these problems, they invited some friends around for a dinner party. They got talking about it over the table. That’s when their friend Chris mentioned Privalgo.

Chris owned a farm. He had used Privalgo a couple of months prior to get a better exchange rate when importing farming machinery. He planned to use them just the once but he said he liked the fact that Privalgo’s Relationship Managers took the time to talk to him and discuss his requirements. Now, Chris was a loyal client, and used Privalgo whenever he needed help with his currency exchange.

Inspired, Susan wanted to give Privalgo a try. After a quick Google, she found that they offered services to individuals as well as businesses like Chris’s farm.
Susan booked an appointed and spoke with Ralf, a Privalgo Relationship Manager. She talked through her concerns. She spoke of how she was worried about where the exchange rate may go. The couple had agreed the price of apartment but had not yet paid for it.

At the time, Brexit negotiations were in full swing. Trevor had seen that headlines about the topic were having negative impacts on the GBP/EUR exchange rate. The couple were worried that the price they would pay for the property in pounds could be significantly more than what they originally agreed upon, should there be any gloomy news stories in the coming weeks.

There was also the issue of not yet having a Portuguese bank account.

Ralf listened to their concerns. He suggested Privalgo’s Flexible Forward solution. This involved the couple ‘locking in’ an exchange rate for a certain timeframe. This would mean that they’d have the same exchange rate throughout the whole property transaction.

Whatever the headlines said, whatever happened in the Brexit talks, Susan and Trevor’s rate would stay the same. Not only would this bring financial security, but it also offered the couple peace of mind. They could focus on other parts of their move, and organise a farewell party, safe in the knowledge that their transfers were safe.

Ralf also found a solution to their Portuguese bank issue. The couple could transfer their funds and keep it in Privalgo’s E-Wallet. Entirely safe and secure, this meant that they could move money over and settle their property transaction. They could keep their funds in the E-Wallet until they found and opened a Portuguese bank account.

Nowadays, Susan and Trevor are living the good life. After the global pandemic is over and international travel becomes more possible, they plan to have their daughter and her fiancée make the trip. Their daughter’s getting married next year and the couple plan to do it in the Algarve.

Susan and Trevor are still in touch with Ralf. Every now and again, they chat about the markets and discuss with him the best ways to move their savings over.

Privalgo specialises in currency exchange. Each year, we help thousands of expats save money, time and stress with market-leading exchange rates and tailored services.