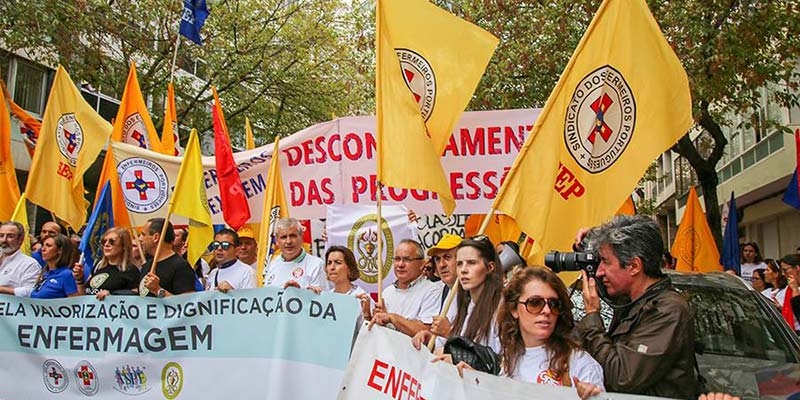 The surgical strike that has seen angry nurses force the cancellation of thousands of operations has today been dealt a body blow.

The Council of Ministers has lodged a ‘civil requisition’ in the name of the government forcing nurses to provide the minimum services as defined by law.

This has nothing to do with the right to strike, explained health minister Marta Temida. It is the government’s reaction to the fact that operations that should have gone ahead during the strike, haven’t – compromising patients’ inherent right to health.

Nurses “must understand” that this was not an option taken lightly, Temida told assembled reporters. Indeed, the government felt there was nothing else it could do but break the deadlock this way.

This has been a strike that transformed the face of public sector disputes in that a largely anonymous crowdfunding campaign has managed to ‘finance’ prolonged and crippling industrial action for week.

It’s a formula that has piqued the interest of international media (click here) and seen ruling Socialists demand transparency.

“All Portuguese people want to know if something or someone wants to attack the national health service”, João Paulo Correia, vice-president of the Socialist bench, explains. “The big question is who is paying for this surgical strike, and how are they paying”.

Stories this far suggest the €700,000 euros ‘donated’ have all come from fellow nurses, but there are clearly those who believe there are other sources with their own reasons for working against the government covertly.

Reacting to the news, ASPE, the association of nursing syndicates, has accused the government of “disrespecting” nurses and embarking on a course of action that could see further “uncontrollable” forms of protest.

“More patients than we could possibly have attended even in normal conditions were booked for surgeries”, she told reporters. “There are situations in which the number of patients exceeded theatre capacity even if there wasn’t a strike”.