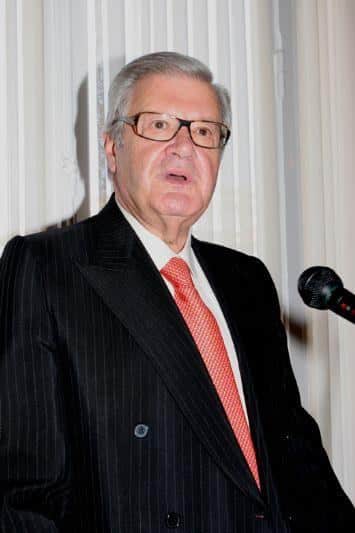 A leading Portuguese impresario has warned about the political, financial and ethical crisis facing modern society.

Alexandre Soares dos Santos, Chairman of supermarket group Jerónimo Martins, warned that society was facing “a severe political crisis with no strong leadership and a society without clear moral and ethical values”.

He said that for the first time in his 75 years, society was living in a world with “no strong leadership and no definite direction”.

“In my time, I have seen difficult periods before, but we were always able to look forward and say that tomorrow would be better than today, but now that’s not the case and we don’t know where we’re going,” he told business movers and shakers at a lunch organised by the Dutch-Portuguese Chamber of Commerce last week.

Referring to the financial crisis, he said that it had seemed as though “things had changed overnight” when in reality the crisis had been “a long time coming”.

“This is a financial crisis where we have tried to blame the bankers rather than accept personal responsibility and never stopped to criticise those who played along with buying risky financial products and investing in the wrong types of assets,” he said.

The nation’s top grocer then talked about the ethical crisis in business and society as a whole.

“When I started out, we never had lawyers and minute takers in meetings, it was all done cordially and on trust and there were never any problems,” he said, adding that “a man’s word had been enough but that was now no longer valid.”

The ethical crisis started in schools and at home with a “lack of parental authority” while young people were not being taught to “deal with setbacks” and were encouraged to think that “everything could be easy”, instead of being won through sheer hard work and enterprise.

“I look at my grandchildren and I worry what kind of world they will inherit. When I was a child and my mother put something in front of me, I had to eat it, no ifs and no buts,” he said.

“Today we even have courses on e-mail language, no one trusts anybody any more,” he said.

The Jerónimo Martins chairman said that politicians, society and business leaders should make use of the crisis to see “where we are and where we want to go” and transmit this message to the politicians who were elected to serve the people and not to serve themselves.

“Where are the statesmen?” he asked saying there were no strong leaders in Europe. “Today’s politicians are incapable of looking beyond the next election, they are short-sighted. Where are the Churchills and the Eisenhowers, men with vision?” he asked.

Getting unemployment down would take “seven to eight years to achieve after the present crisis” while peoples’ pensions would no longer be worth what they should be on retirement.

Absenteeism in elections both nationally and at an EU level was running at 25 per cent which showed that either “we couldn’t care less” or that “we don’t have confidence in our political leaders.”

“Companies have to start speaking up and not be afraid of politicians and governments. It starts with ethics and a Code of Conduct, otherwise what is Europe going to be like in 50 years time?” he asked.

On a positive concluding note he said that despite the crisis, Jerónimo Martins results had been better than anticipated and that the company favoured wage freezes, bonus cuts and shareholder dividend reductions rather than dismissing staff.