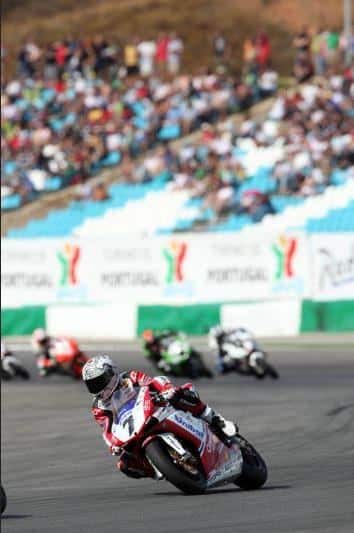 The biggest annual event on the Portimão Motor Park (AIA) racing calendar, the Portuguese round of the World Superbike Championship, will be coming to the Algarve for the fifth consecutive year from September 21 to 23.

Second only to MotoGP in terms of prestige, the Superbike category features star riders such as Ducati’s Carlos Checa, BMW’s Marco Melandri or Kawasaki’s Tom Sykes as well as current championship leader Max Biaggi (Aprilia), all of whom are still in title contention. Prior to the penultimate Algarve race the world championship season, which ends in Magny Cours on October 7, is still to visit Moscow this Sunday and Germany’s Nurburgring on September 9.

No less exciting is the supporting Supersport category which sees a return ‘home’ for title contender Sam Lowes. The Englishman, who trails championship leader Kenan Sofuoglu (Kawasaki) by only 14 points in second place, impressed for the local Parkalgar team in 2011 but was forced to switch to sister outfit Bogdanka PTR Honda at the beginning of this year when Parkalgar was forced to withdraw due to lack of sponsorship.

Furthermore the September 21 to 23 racing weekend features the Superstock 1000 and 600 classes, the KTM European Junior Cup as well as the Portuguese Superbike Championships making for a ‘must see’ for all motorbike racing fans.

Tickets are already available on the AIA website and at the track box office- as part of a special promotion, until the end of this month every purchase entitles buyers to a 50 per cent discount on a second ticket.