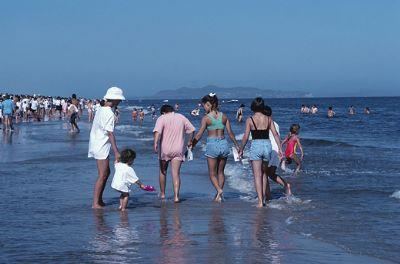 After a few false starts, summer is here at last. My favourite time of year. This is why I left the chilly climes of North Yorkshire where the bitter winds whistled uninterrupted from Siberia to freeze the very marrow of my existence.

Despite the fact that our roads will soon be grid-locked, our beaches covered in a sea of lobster-pink bodies, and our supermarkets crammed with siege-mentality shoppers clad in little more than a skimpy bikini and a flimsy sarong, bring it on!  I was never very good with sarongs and my bikini days are over hence my undisguised envy.  Although I’m not sure I never went shopping so scantily attired. And I will never understand why they buy so much food!

But I digress.  My point is that we Brits, with our fixation for the weather, have a habit of over-stating the obvious. “It’s raining!” we say as if no-one else has noticed. “Spring is here!” we announce as the first daffodil bursts from its bud. So true to form I take it one step further as plane-loads of holidaymakers descend our shores and herald the beginning of summer.

In a bid to improve my language skills which are still far from adequate, as well as continue this Great British tradition, I need to know exactly how to say, in Portuguese, that “summer is here!” As is so often the case, it’s the ‘is’ that gives me the problem.

My first reaction is to go for the temporary version of the verb ‘to be’, estar, because sure as eggs are eggs, summer will be replaced by winter and is therefore a temporary institution. On the other hand – and there’s always another hand which is extremely irritating – summer is a permanent fixture in the calendar and should perhaps be given permanent status from the verb ser. These either/or’s are doing my head in.

So which is it to be?  “O Verão está aqui” or “O Verão é aqui”?  It transpires that it is neither, and I can put the verb ‘to be’ back in its box where it belongs. What a relief! It’s “O Verão chegou” – ‘summer arrived’, which makes perfect sense when you think about it. So why didn’t I think about it? Don’t answer that.

Passengers arrive, as indicated by the huge Chegadas sign at the airport as they wait impatiently cheek-to-cheek in the steaming hot transfer bus, listening to the merry tunes of 50 mobile phones alerting their owners to the “Welcome to Portugal” text.  But summer? I’m not so sure. I mean, we don’t say “the gardener arrived”, when he turns up for his weekly grass-cutting session.  We say “the gardener is here.” Actually we say “the gardener’s here”, but the apostrophe doesn’t exist in Portuguese so we have to be a bit more precise.

But back to summer, and the importance of passing on such an important translation weighs heavily on my shoulders, so I checked “O Verão chegou” with Guida the Guru who gave it her seal of approval. This must be a first and I don’t know which of us was most surprised!  It’s no secret that I don’t win any prizes in her star pupil competition. She then went on to list the many variations I could have used.  So I gagged her and locked her in the laundry.  Enough is enough!

More often than not it’s these little sentences that give me the biggest problem.  In response to Guida’s cheery “Como está?” one wintry January morning when she arrived for our weekly language lesson, I replied “Estou frio!”  The fact that I was wearing a polar fleece, as well as a Puffa jacket and scarf was testimony to the fact that I was frozen to the marrow.  And that was indoors!  I seriously regret throwing away my fur-lined boots, thermal underwear and woolly hats when we left England. She was quick to point out that I was wrong. Guida never misses a trick.  One is not cold, she informed me.  One is either ‘with cold’, “Estou com frio”, or one ‘has cold’, “Tenho frio”.

I don’t know about you, but if I’m either of the above, I’m off to the chemist’s like a shot, because this miserable condition which turns your nose into a big red blob in the middle of your face and makes you feel as if you’ve eaten barbed wire, not to mention keeping you awake all night as you cough until you break a rib or slip a disc, needs to be dealt with immediately.

When I lived in England, this annual misery presented no great problem because supermarkets as well as chemists had rows and rows of proprietary medicines to choose from, and self-diagnosis became part of the cure as you chose between honey and lemon, or menthol and eucalyptus to soothe your red-raw throat.  Is my cough a ‘tickly’ one, or a ‘chesty’ one?  Whichever, I’d come home armed with lozenges, linctus, and an empty purse, knowing full well that a couple of paracetamols three times a day would have done the trick with equal success, but I’m an advertiser’s dream and this retail therapy was as much a part of the remedy as it was a waste of money.

But this is not the case here in Portugal. Proprietary medicines are only available at the Farmácia, and even then only over the counter, so you have to take your ticket and wait in line before it’s your turn to explain in a voice that comes from your boots that you’d like the appropriate medication for this common complaint.

This is where it gets really tricky, because the word for a cold is the same as that for a condition you’d much rather not discuss in front of a shop full of people. A word you would prefer to save for the cloistered safety of your doctor’s surgery, or better still, never utter at all. Constipação. Known colloquially as the ‘Englishman’s Embarrassment’, you don’t need me to give you the exact translation, and no amount of stiff upper lip can spare your blushes as you attempt to say it as if it was an everyday word.  Suddenly the idea of two paracetamols three times a day becomes very appealing.