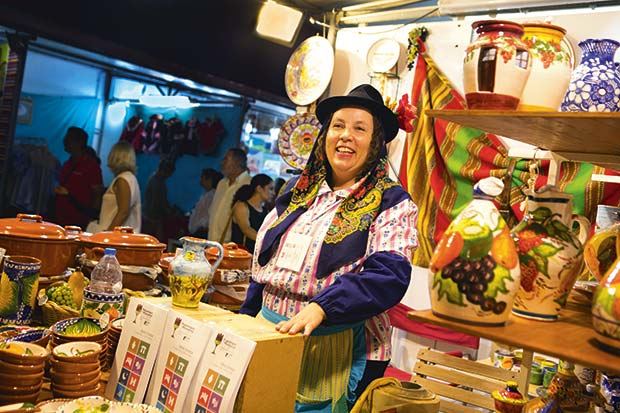 There are many reasons why the Algarve continues to grow in popularity as a tourism destination. We all know the weather is amazing, the beaches are stunning and the food is delicious. But nothing brings it all together like the region’s many summer events which showcase the best the Algarve has to offer. And now that the second ‘365 Algarve’ cultural agenda has been officially announced, the prolific list of entertainment is set to continue into the winter.

But first let’s look at what is going on in the Algarve right now.

The event is one of the region’s most popular summer happenings, attracting hundreds of thousands to the town for over 30 years.

If you are one of the few people in the Algarve who has never attended the fair, Fatacil features everything from local crafts and businesses promoting their work to all kinds of delicious food and regional delicacies as well as a long list of entertainment, concerts and equestrian events.

And though organisers admit that the event’s success had somewhat “stagnated” in recent years, an effort by Lagoa council to breathe new life into the fair has worked wonders, judging by the visitor numbers so far.

Just in the first three days, 40,000 people visited Fatacil with many praising the revamped fairground and the novelties introduced.

Daily tickets cost €3.50 (children under 12 enter for free), with doors opening at 6pm and closing at 1am.

Castro Marim is hosting its ‘Medieval Days’ (Dias Medievais) fair, allowing visitors to experience what it was like to live during the Middle Ages.

The main festivities happen inside the town’s castle, including fairs, recreations of medieval tournaments on horseback, and even a royal medieval banquet (click here).

But if you’re a bit of a party animal, rest assured that there is much more to choose from.

Just this Saturday (August 26), there are two major events scheduled.

In Carvoeiro, a Beach Party will mark the end of the town’s summer celebrations. Festivities begin at the main square at 8pm, with several musicians and DJs providing musical entertainment into the night (click here).

At the same time, Loulé will be hosting the return of the town’s hugely popular ‘Noite Branca’ (White Night) party.

The event, as always, will feature colourful street entertainment, live music and chill-out areas with DJs.

Admission to both events is free.

For the most daring, there will be a chance to say goodbye to the busy month of August in great style.

The ‘Banho 29’ tradition is being celebrated in Lagos and will see bathers going for a swim at Cais da Solaria when clocks strike midnight on August 29 (click here).

The perfect event for foodies interested is the Algarve’s popular Rota do Petisco, which starts on September 8 with 160 eateries in Portimão, Lagoa, Silves and Monchique serving traditional tapas (click here).

Also next month and just the thing for jazz lovers, Vila Vita Parc in Porches sees the return of the Algarve Smooth Jazz Festival, featuring the biggest and best international names in jazz, soul and funk (click here).

With so much going on, the hard part is choosing where to go and what to do.

For decades, the Algarve has become known for its incredibly busy summer months and “ghost town” label in the winter. This is a trend that tourism bosses are keen to eradicate once and for all, with the low season showing the potential to become shorter and shorter each year.

Last year, the government tried to tackle the problem of seasonality by launching the ‘365 Algarve’ programme in a bid to boost the winter cultural calendar, with around 1,000 events announced.

It was praised by some and criticised by others, but the government remains committed to it and is reintroducing it this year with the same budget (€1.5 million) but half the number of events (525) – could this an attempt to invest in quality rather than quality?

The programme’s theme this year is ‘A Territory of Sun for the Arts’ and the goal is to “improve the holiday experience of the Algarve during the low-season, and ensure a more sustainable destination that is able to attract tourists all year round”.

The ‘jewel in the crown’ of the ‘365’ agenda is ‘LUZA’, the Algarve International Festival of Light, a new event in Loulé that aims to put the region on the map of the world’s biggest light art festivals this November (click here).

Other events include Alcoutim’s surprise-hit Contraband Festival (March 23-25), the Algarve Jazz Gourmet Moments in Lagos (May 25-27) and the Lavrar o Mar project, which will feature many “off the beaten track” cultural events.

The plan is to show that the Algarve can be just as enjoyable to visit in winter as it is in summer. For now, the sun is shining, nights are warm, and there’s much to enjoy before the summer ends.