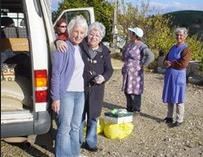 THE IDEA was to give some of the region’s elderly presents for Christmas – however, the generosity of the Algarve has meant a great deal more.

Organisers of the first annual Shoebox Drive for the Elderly, David and Celia Mossman, were overwhelmed by the 145 filled shoeboxes that were handed in to be distributed to the elderly this Christmas by charitable organisation Castelo de Sonhos.

The Mossmans run a Friends Luncheon Club, which raises money by holding a raffle at each lunch. Members agreed that the money raised should go to the elderly in need. The total of 745 euros that was raised has gone towards providing much-needed blankets for the elderly in the Algarve.

When Carol Williamson read about the campaign, she and her husband Alan, Master of Prince Henry The Navigator Lodge of English Masons in Portugal, chose the Shoebox Drive as the charity for their Ladies Festival held at the Hotel Garbe in December. Many of the guests brought filled shoeboxes to the dinner, and a raffle and silent auction raised a staggering 1,764 euros for Christmas food parcels for the elderly.

Maureen Yould and ladies of the Western Ladies Luncheon Club also decided to support the appeal and ran a bring-and-buy cake sale at the Christmas Fair at the Hotel Garbe. A total of 130 euros from this event was used to buy warm socks.

A big thank you goes to all who participated. This Christmas you have made a difference.