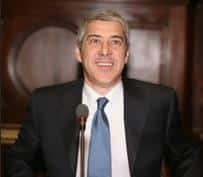 THE EU’s Constitutional Treaty must involve the co-operation of all and not just a few key members, the Prime Minister said recently. José Sócrates was speaking at the launch of a round of debates on the future of Europe at the Portuguese Parliament.

The event was also attended by the Minister of Foreign Affairs, Jaime Gama, Secretary of State for European Affairs, Ambassador Fernando Neves, and Forum President António Vitorino. The Forum will serve to open a nationwide series of discussions on the future of Europe, the European Community and its relevance to Portugal.

The Forum debates will focus on four main areas: the nature of the European project, the balance of Portugal’s membership during the past 20 years, the future of Europe and the EU Constitution.

During the launch, the Prime Minister said that, on balance, Portugal’s membership of the European Union had been “overwhelmingly positive”. He also stated that the future of the EU’s Constitutional Treaty depended on “a collective solution” and not just on one or another of the member states (meaning all the states, not just Germany, France and the UK).

“We can’t say yet if the Treaty will be a success or not, but we have to have a notion that the project will work if all the states work together, rather than just one or another,” he said.

Sócrates said that the Constitutional Treaty should be “a simplified version of the EU project” – one that should be “clear and easy” for its 450 million citizens to understand.

Referring to what is essentially a plan for a United States of Europe, he stressed that, “Europe shouldn’t be frightened of choosing full social and economic integration.”

The Prime Minister also referred to the disastrous “No” votes by both France and Holland, which put Portugal’s plan to vote on the subject on ice. “The government postponed the referendum because it believed that the next steps should be taken in a concrete manner by all of the European Union members, and the present deadlock only reinforces the necessity for debate,” he said.

He added that the debates should not only focus on the EU Constitution and its implications from the recent enlargement, but should also discuss Europe’s economic growth. “Apart from the present stalemate, “Europe is going through a period of reduced economic dynamism, one overshadowed by doubts and ambiguities on the European social system, while unemployment was far too high,” he added. “We should also discuss employment and the enlargement of the EU’s frontiers.”

Referring to the need for the debates, António Vitorino said that it needed to be recognised that the EU project was very complex and difficult to explain. The various studies in different countries seem to show that the word ‘Europe’ was one of the best incentives for the public’s frenetic practice of ‘zapping’ because it was so complex and misunderstood. “These debates will serve to contribute towards a better understanding of  what the European Union is and what that means for Portuguese citizens,” he said, adding that it was vital that the EU managed to resolve the crisis of confidence that many citizens had over the project, by defining priorities and action plans.

Fernando Neves said that the present European crisis was about expectations of what the EU could and couldn’t be and deliver. “Europe will always be complex because that is the price one has to pay for diversity and respecting the national identities of the 25 member states. European citizens are naturally worried about the economic viability of the project as well as unemployment,” he added. “There will be genuine limits to the efficiency of the EU and its ability to fulfil its aims, objectives and missions in the sense of why it was created.”

It was also stated that an enlarged EU was responsible for one quarter of the world’s production and wealth, which inevitably made it a key global player, and that Europe must be ready to assume its responsibilities for the destiny of the wider international community.

at the Portuguese Senate