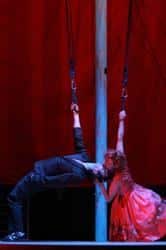 The festival embraces film, new writing and contemporary music, as well as a comprehensive survey of theatre artists currently interpreting Shakespeare worldwide. The Complete Works will celebrate the truly global reach of one of the greatest writers in the English language and will be the first time all 37 plays, sonnets and long poems are presented at the same event.

As well as celebrating RSC talent, the festival will showcase international artists like Peter Stein and Yukio Ninagawa, who have made a lasting impact on the performance of Shakespeare. Joining them will be some of the UK’s most exciting theatre artists, with famous names due to appear including Patrick Stewart, Harriet Walter, Judi Dench plus the return of Ian McKellen as King Lear, directed by Trevor Nunn.