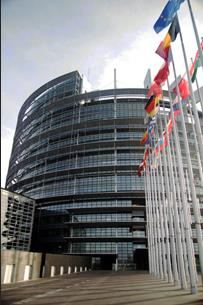 THE FRENCH are very proud of Strasbourg. It is the official seat of the European Parliament. It has a dramatic building, designed for the purpose and constructed just nine years ago.

Although most of the time MEPs are in Brussels, in order to fulfil a barmy Treaty commitment made by EU Heads of Government we have to make a pointless slog to Strasbourg 12 times a year. Except that events have come to our rescue. It has just been established that the ceiling needs sealing and there is a flaw in the floor. The building is currently shut and MEPs are still in Brussels.

It was back in August that a large part of the ceiling fell down. Literally tonnes of plaster and ironwork collapsed into the main Chamber where all the voting normally takes place. Just a few days earlier, a number of children had been sitting there as part of a special school trip: if the visit had been a few days later, dozens could have been killed.

The early September session was immediately cancelled and transferred to Brussels.

The benefits were immediate and obvious. The first Monday there had been an emergency meeting of the EU Council (always held in Brussels) to discuss the situation in Georgia. Within minutes of the end of the session, the French Foreign Minister was able to come to the Parliament and brief MEPs on what had been agreed and exchange views. If MEPs had been in Strasbourg, we would have learnt a day late. The pointlessness of trekking to Strasbourg could not have been clearer.

Meanwhile, a full structural inspection of the building was put in place, and further problems emerged. The watering system designed to refresh the various plants has been steadily rotting the foundations. Some of the panels at the edge of various walkways have been shown to be unsafe. One official said to me privately that it “was a miracle” that nobody had had an accident.

So the second autumn session was also cancelled. Again we stayed in Brussels. Our fervent hope is that common sense can now prevail and that we can stay in Brussels permanently.

It would be ironic if a building opened with a fanfare by Chirac in 1999 could be closed with a fanfare by Sarkozy in 2008. But such a fanfare would not just be welcomed by MEPs. It would be welcomed by the million-plus citizens who have signed our on-line petition, as well as countless others who want to see an end to the wasteful EU spending of which this silly building is a major symbol. We need Heads of Governments, including our own, to give the lead.