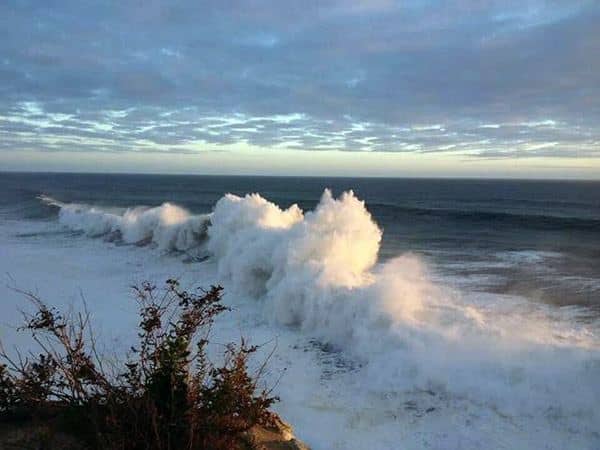 Airports on high alert, ports closed, coastlines underwater, mudslides, power cuts and damages spiralling into the hundreds of thousands. Portugal woke up this morning from a battering that saw gusts of wind as strong as 118kph.
As civil protection services assured the “worst is over”, news comes from weather experts that there is more on the way.
IPMA meteorologist Paula Leitão told Público newspaper this morning that Monday’s “period of calm” will be followed by “a worsening of conditions” from midnight on Tuesday, with strong winds and rain forecast and predictions for the rest of the week looking distinctly messy.
But as Sunday’s storm receded, Lisbon airport was getting back to normal. At the height of this latest round of bad weather, the airport had activated its “emergency plan”, delaying flights departing from Lisbon and diverting incoming jets to Faro and even Madrid. Some flights in and out of the capital were cancelled as gusts on the runways topped 93kph.
Elsewhere, the districts of Porto, Coimbra and Aveiro were worst hit, with civil protection services working flat out for 23 hours answering a total of 2,259 calls for help which involved up to 8,767 personnel.
Taking a tally, 1,616 trees came down – numerous blocking roads and access points – 377 structural collapses, 114 mud- and earthslides and 99 separate incidents of flooding.
Viseu in the north was further hampered by snowfalls which saw main roads cut off and treacherous.
In the Sintra hills, dozens of trees were reported down, roads were blocked off and nearby beaches were stripped of sand.
“I have never seen anything like this”, said a resident. “What will it mean for our tourism this summer? I cannot see how the beaches will come back in time.”
PS opposition leader António José Seguro visited Praia do Pedrógão in Leiria and saw some of the storm damage for himself. According to Correio da Manhã, this beach may be one of the lucky ones to receive new sand in time for the summer.