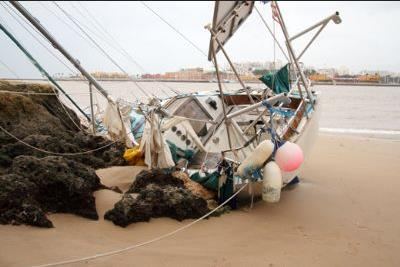 Heavy rain, strong winds and high waves caused damage and devastation across the region this week.

According to a spokesman from the national civil protection authority (ANPC), a total of 140 incidents were registered on Saturday and Sunday.

There were 13 road accidents, 15 incidences of flooding, three land slides, the falling of 79 trees and the fall of 30 structures.

He also said that a total of 196 vehicles and 478 people from the civil protection authority, fire brigades, GNR, INEM and other emergency services were involved in the cleanup and rescue operations on those two days.

The Algarve was also put under a yellow alert situation, the second on a scale of four, throughout the weekend until midday on Monday.

Reis Ágoas, commander of Portugal’s southern coast, said that the ports of Vila Real de Santo António, Tavira and Olhão were also closed by the maritime authority over the weekend “because waves of seven metres were recorded by the buoys out at sea”.

He added that the access to Faro Island was also restricted to permanent residents of the island.

The maritime authority registered 17 incidents at sea, including the grounding and sinking of recreational boats.

In Ferragudo, three sail boats were grounded on Praia Grande beach, with one having been smashed against the rocks due to the strong waves.

For more information, Portugal’s meteorological institute publishes up to date weather reports on its website, available in English and Portuguese. Click the link on the right of this page.

Do You Have A View On This Story? Email us at editor@algarveresident.com