I have been working from home for a long time, yet I had never set up my ‘office’ in the garden as I feel I am more efficient sitting at a desk in a quiet room. However, May’s first warm day of the year, I decided that, after so many months locked inside, perhaps I did need some vitamin D.

Table, chair, pad, pens, telephones, pc, and I were ready to go. How peaceful and lovely it seemed. I was feeling good and thinking I really ought to do this more often. What a great working environment looking across the garden, thinking how the grass needed cutting, the trees pruning, the weeds pulling … my thoughts were getting distracted.

The chirping of the many sparrows that nest in our roof was pleasant. Sparrows are in decline in Europe, their numbers reduced by 60% in the last 30 years, which amazes me because we have so many, but admittedly not as many as we had 20 years ago. I worked away dealing with my emails and the odd phone call.

Midmorning, a spotless starling perched on the tree opposite my ‘office’ and proceeded to let out long whistles. These starlings are mostly found in the Iberian Peninsula, Northern Africa and Southern France and are wonderful mimics, able to imitate other birds. However, his whistles set off our budgies and cockatiels that live in our outdoor aviary.

‘Cocky’, our cockatiel, is also a mimic and started to imitate our ancient wheelbarrow that has a squeaky wheel. For once, I did not find this amusing as on and on he squeaked.

The traffic intensified temporarily drowning out the bird orchestra, then my dogs who had been lying quietly at my feet decided to bark at a cyclist, chasing him angrily all along the fence.

These noises were intermittent, so I put up with them and carried on working because I was enjoying the sun and fresh air.

I smiled to myself as the peacocks next door called out to each other, but I was less impressed with the pigeon that kept calling ‘who who who’. At least it was not our resident hoopoe that drives me mad in the mornings with its continuous ‘hoop hoop hoop’ when I’m trying to sleep.

Hoopoes are beautiful exotic birds to look at and much folklore surrounds them. Found in Europe, Asia, and Africa, they were sacred in ancient Egypt and a symbol of virtue in Persia. Yet, in parts of Europe, they have been viewed negatively as thieves and connected to death, wars and the supernatural. I was shocked to read that they are also used in Morocco and parts of Asia for medicinal purposes, with claims that hoopoe-based medications can cure all sorts of ailments. Perhaps I will, from now on, appreciate them more.

I am used to the hum of our many bees and wasps but, hearing a very loud buzzing, I looked up from my emails to see, landing on the hammock, the largest insect I have ever seen, and I have no idea what it is or if it is dangerous! A type of bee or wasp?

Did you know that there are over 20,000 recorded species of insects in Portugal? I love the Portuguese word for bug which is ‘bicho’, one of the few Portuguese words my English husband knows and a huge variety of ‘bichos’ live in our garden, as I soon found out!

I felt a tickle on my thigh and looked down to see one of what I call ‘jumping spiders’ that inhabit our windows indoors but which are usually so small that we leave them alone in the hope that they will eat some of the many mosquitoes or flies we are plagued with every summer. I brushed it off and carried on working.

Then I felt something on my foot (I was wearing flip flops) and looked down to see a couple of giant ants making their way up my leg. They have made a hole in our cobblestone ‘calçada’, producing a fascinating volcano of dirt which they removed from their nest. Worldwide, there are over 13,000 ant species, 126 types in Portugal and ‘millions’ of them live around our house. 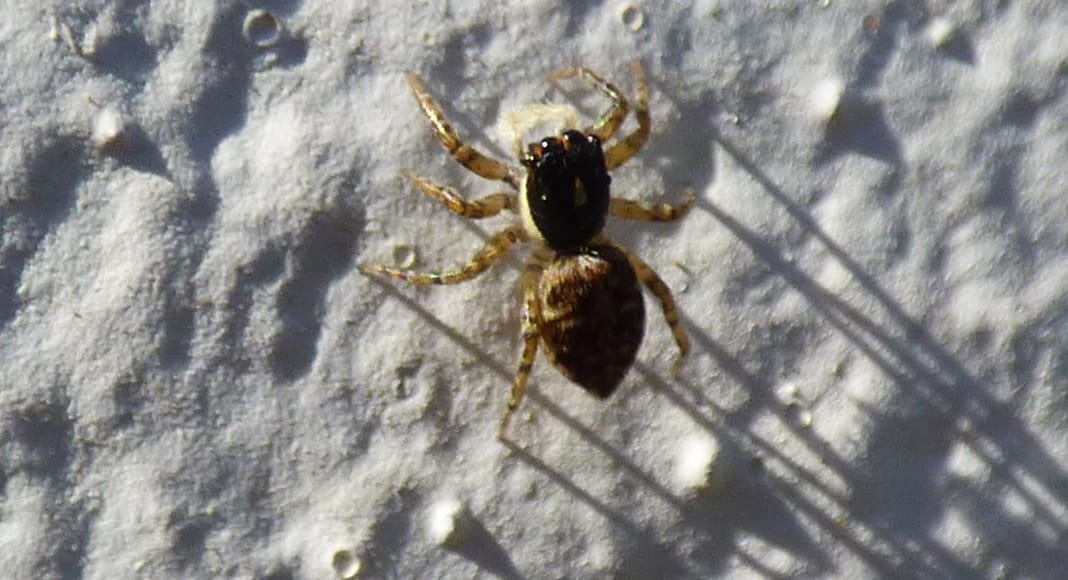 When we first moved here, we were plagued by tiny little black ants that regularly invaded the kitchen, but now we have more of these large ones that thankfully stay outside.

Sitting next to the house, I was occasionally distracted by what I dubbed the ‘bug highway’ as I watched a black millepede making its way along the wall skirting, bypassing the sleeping snails, occasional beetle, woodlice or spider and dodging around the busy ant traffic. There are a lot of these millepedes around and I have never worried about them when I found them indoors.

Now, having googled them, I am not so keen. Mostly nocturnal, these millipedes that can invade in their thousands can stain and damage furniture and furnishings with a pungent yellow secretion, so, from now on, I will be carefully removing them from the house.

A beetle decided to help me work by flying down onto my keyboard and refusing to move, so I also googled him (still no idea what it is but what great eyes), then brushed him off and carried on working.

There are numerous beetles with beautiful colouring, which we find on walls and on the amazing wildflowers that grow around our property. Over 350,000 species exist worldwide and we really should take more time to admire and appreciate this wonderful fauna and flora around us. I particularly like the metallic green and purple ones and we currently have a plague of the red neck ones!

When finally a really weird opaque yellow spider, which was too large for my liking, somehow landed on my arm, I decided that there were too many bugs bugging me outside.

Of the 1,000 species of spiders in Portugal, two are potentially dangerous and I was taking no chances. However, the final straw was when I started to pack up my things and one of those ‘endangered’ sparrows decided to poop on my arm from a great height. This apparently is a symbol of good luck indicating that prosperity and a positive change in my life was coming soon.

My positive change was to go indoors, but there was nothing lucky about it as I returned to my indoor desk to be divebombed by a large blue bottle flying around. I live in a beautiful place but not one conducive to working peacefully outside!