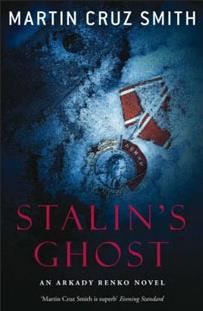 Stalin’s Ghost by Martin Cruz Smith is out in paperback at 12 euros.

Moscow lies deep under snow and Detective Arkady Renko is called in to handle a delicate matter.

Passengers riding the last metro of the night have reported seeing the ghost of Stalin on the platform edge. Not everyone, it seems, likes the fact that Stalin is dead.

But in the midst of a blizzard, nothing is as it first appears to be.

Renko’s girlfriend Eva and his adopted son, Zhenya, seem to be slipping into danger.

A chess grandmaster wanders into Renko’s life and leads him into the line of fire.

Diehard Communists gather to sing along with Stalin, while Red Diggers uncover secrets buried for half a century in a desolate forest.

Renko discovers ghosts that have been waiting for him all his life.

Stalin’s Ghost is also a wonderful evocation of the emerging New Russia and is an original and humane thriller.