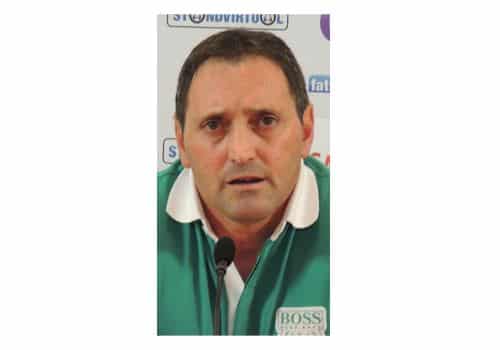 Santa Clara had drawn both their previous home games whilst Olhanense had drawn both their away fixtures, so it was not surprising that the teams shared the points in this closely fought game. The only surprise was that these free scoring teams failed to find the net.
Santa Clara’s centre-forward Clemente has scored seven times in nine games including both goals against Olhanense in the League Cup in July whilst the visitors had racked up five goals in their two away games.
Santa Clara had the first clearcut chance when Clemente shot wide and minutes later Celestino’s shot flew over the bar at the other end.
At the interval new French signing Buval – he had three seasons at Bolton Wanderers as a youth player – made his debut when he replaced Aguilar.
Olhanense forced the pace after the break and within minutes Pedrelli rattled the woodwork. The home side responded and should have done better when Tiago Ronaldo blazed his shot straight at keeper Tiago Maia.
With fifteen minutes to go, Olhanense had a great opportunity to snatch all three points when Duarte’s cross was met by Semedo, only to see his effort sail the wrong side of the post with Serginho stranded.
As the final whistle approached, Santa Clara had a strong claim for a penalty when Nuno Diogo appeared to handle the ball but referee Luís Ferreira waved away the appeals.
Local derby highlight of Cup draw
The draw for the 2nd round of the Portugal Cup has given Olhanense a home tie with non-league Quarteirense just 30kms along the Algarve coast.
Silves, one of the lowest ranked teams still in the competition, must travel to the Almada district of Lisbon to play Cova da Piedade whilst SC Farense will also be in the capital to take on fellow 2nd Division rivals Oriental. Portimonense entertain Real SC (Sintra) while Louletano face a long journey north to do battle with GD Chaves. Games are scheduled to be played on the weekend of September 27/28.