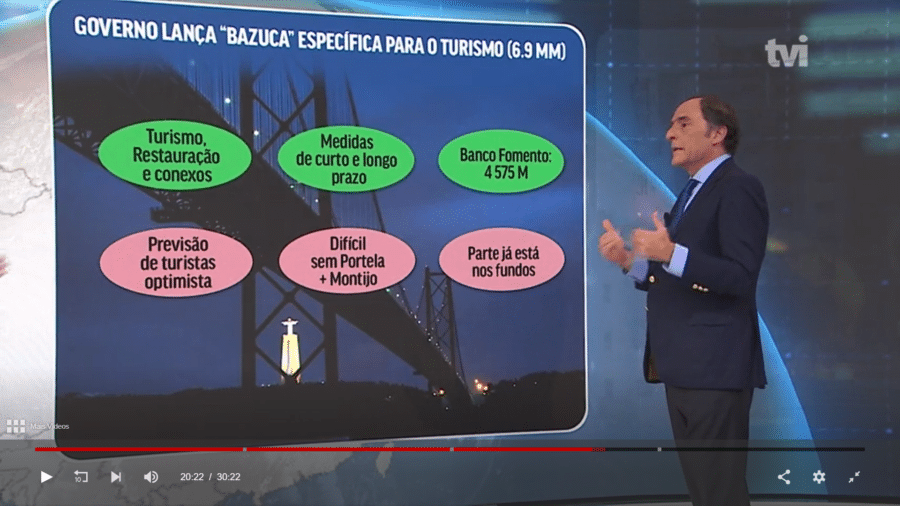 The government is preparing a “specific bazooka” for tourism in Portugal, valued at €6.9 billion.

The news however has not come from the government. It came from former deputy prime minister Paulo Portas in his regular Sunday night commentary slot on TVI.

He said the government is in talks with social partners for what amounts to half sum of the European bazooka of non-refundable grant aid coming Portugal’s way to support recovery from the pandemic.

And as the last 14 months have affected some sectors much more than others, Mr Portas said this money will be invaluable – particularly for restaurants, travel agencies, touristic animation businesses, rent-a-car firms etc.

Tourism and restaurants were the sectors “most prejudiced and hardest hit” by the government’s response to the pandemic – and yet both have “enormous importance” for the Portuguese economy, he said.

Mr Portas used a diagram (above) to explain where the money would be going in the short, medium and long term.

Short term measures are “basically the restructuring of debt for businesses that are in financial straits”, he told news anchor José Alberto Carvalho. The Banco Português de Fomento (Development Bank) will have €4.575 billion “and will intervene when it comes to recapitalising the sector”.

The bank ‘may get the money from whatever the PRR (the European bazooka) doesn’t use’, or it ‘may go to the markets’. Mr Portas didn’t seem to know the exact details.

The former president of the CDS-PP (now a party nothing like as politically relevant as it used to be) did say however that he thought PS Socialist expectations for the recovery of tourism “could be excessively optimistic” – principally because a sustainable recovery will require a substitute airport for Lisbon’s run-down Humberto Delgado/ Portela airport, and thanks to a great deal of to-oing and fro-ing, there have been no decisions yet on the ‘option of the government’s choosing: Montijo airbase’.