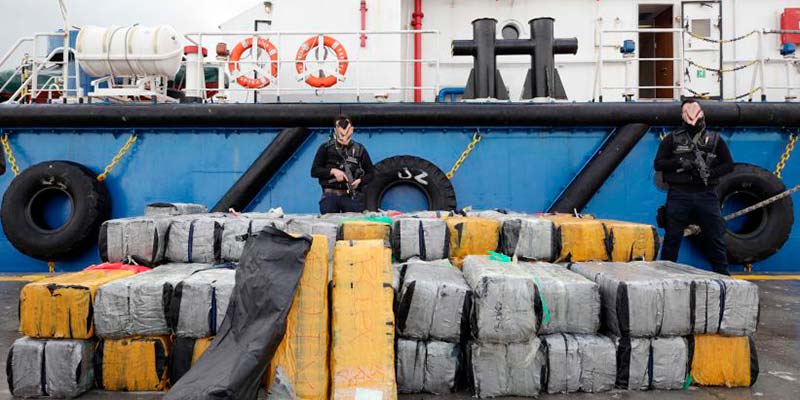 Yet another combined police, Air Force and Navy operation has seen a 2.5 ton haul of cocaine, bound for Portugal, nabbed on the high seas.

Waves at the time were over 3 metres, say reports, with winds raging.

The 11 traffickers on board were arrested “without resistance”, and the 81 bales of cocaine, each weighing 30 kilos, quickly located.

Director of the PJ’s unit for the combat of drug trafficking Artur Vaz described this latest operation as involving “complex coordination and planning” – with the end result a resounding success.

Over 125 million euros worth of cocaine that would otherwise have entered Portugal en-route for various European countries is now sitting in a police evidence room as the men detained – almost all from eastern Europe, and ‘known felons’ – have already been taken before magistrates and face multiple charges.

This is not the first time such a large haul of cocaine has been ‘seized’ in one shipment. Last March a combined PJ and Spanish police operation apprehended the exact same amount, arresting 10 traffickers of various nationalities – and in September there was more success when a catamaran carrying 840 kgs was seized in the Azores.

At the time, authorities said cocaine hauls at sea over the summer had netted 10 tons of the drug.

As Artur Vaz explained, the operation “resulted from the exchange of information through MAOC-N (the Maritime Analysis and Operation Centre – Narcotics), an agency based in Lisbon in which several European countries participate: Portugal, Spain, France, UK, Ireland, Italy and Holland”.

Talking to journalists on Setúbal docks where Sea Scan 1’s haul was unloaded , Vaz said the drug quality was of ‘high grade’ which could have been sold for €50-a-gram in southern Europe and as much as €200-a-gram in northern countries.

What is clear is that the ship left Suriname on January 11, and was ‘en-route’ for Portugal – hence the reason why it was brought into shore at Setúbal.