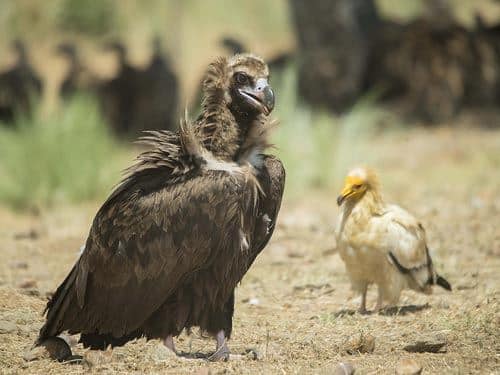 Bird protection society SPEA is sending out a special appeal today (Saturday September 6) in a bid to halt the decimation of Europe’s vulture populations.
SPEA claims that diclofenac, an anti-inflammatory widely-used for cattle, has already resulted in the disappearance of almost 99% of vulture populations in southern Asia.
Its use is threatening Portugal’s already highly-endangered vulture species – the Griffon, Egyptian and Black vultures – all of which play a vital role in the country’s ecosystem.
SPEA’s concern is heightened by the worry that diclofenac could start to affect other birds-of-prey – particularly Imperial and Golden Eagles, which are both in danger of extinction in Portugal.
Thus, on today’s International Vulture Day, it has sent out an appeal. Access BirdLife International’s campaign: “Stop Vulture Poisoning Now” (https://www.justgiving.com/stop-vulture-poisoning-now/) to learn more about this problem and try and push for a move away from the use of diclofenac.
According to SPEA, there are other chemicals available that work as anti-inflammatories on cattle and do not harm vultures.
As things stand, a vulture feeding off a dead animal that has been treated with diclofenac will be dead “within two days”.
Meantime, SPEA and a group of other NGO’s are pushing for diclofenac to be outlawed in Portugal, while BirdLife International and the Vulture Conservation Foundation are trying to get the chemical banned throughout the rest of Europe.