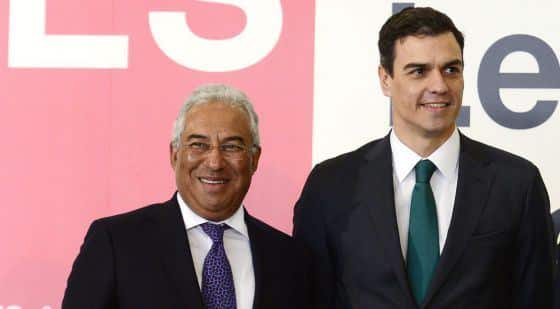 With Spain’s political future still in turmoil, the man whose PSOE (Socialist Worker) party holds the key to power has been in Portugal drumming up support for a pan-European Socialist front aimed at uniting forces in France, Italy, Greece and Ireland.

Pedro Sanchez cut an impressive dash as he towered over prime minister António Costa and the two exchanged warm greetings in Lisbon yesterday.

There was a lot of hand-pumping and smiling, and the message was loud and clear: one way or another, European politics are changing.

For Sanchez, the way forward is every bit as complicated as it was for Costa to forge agreements that saw the PS Socialists finally awarded power.

He will have to align with groups like Podemos and Ciudadanos that are effective rivals and which could as a result, explain media sources, “gobble up” PSOE to a point of no return.

The party has already seen its number of seats in parliament reduced to 90, which their lowest result ever.

Just as in Portugal during the post-election period, the minority ruling (austerity- based) former Spanish ruling party under prime minister Mariano Rajoy is making noises about the folly of Spain being run by “a coalition of losers” – but international media is unanimous in its doubts that Rajoy’s PP party can find the support it needs to establish a sustainable government.

The situation has been described as “the worst result” for both PP and PSOE “since the restoration of Spain’s democracy” – and time is running out. Sanchez has to find a workable deal by next week (January 13) or King Felipe will have to take centre stage and find a way through the political morass.

Spain’s Expatica website explains the King’s choice “will then be put to the senate” and if the man he choses to be prime minister secures the backing of 176 MPs then Spain will have a new government.

If not, the country faces another round of legislative elections and even more uncertainty.

But as Sanchez words of support for Portugal’s “stable” PS government are picked up by news services both here and abroad, EC president Jean-Claude Juncker was quizzed by Spanish journalists as to whether he actually believes that Portugal’s new executive is stable.