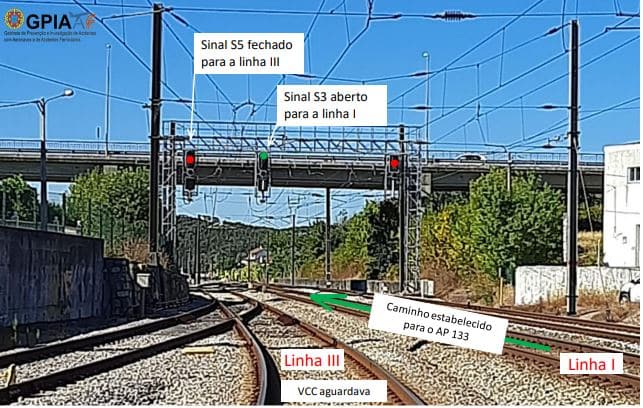 Investigators have already come to the devastating conclusion that yesterday’s accident was caused because the maintenance vehicle – carrying the two men who lost their lives – “ignored a red light”.

The whole incident happened ‘too fast’.

Literally at the moment the maintenance vehicle ‘ran’ the red light, the green light ushering the high-speed Alfa Pendular train through Soure, switched to red.

But it did so “a fraction of a second” AFTER the train travelling at 190 km/ hour had passed.

Once the two train operators realised what was happening, they engaged the emergency brakes, explain reports.

It’s all they had time to do.

Impact followed almost instantly afterwards, sending dozens of people to the floor of carriages, causing all kinds of injuries – some much more serious than others.

As the preliminary findings have come from GPIAAF (the Office of Prevention and Investigation of air and train accidents) further tragedy has struck – in Leiria this time, where a train carrying 11 people has struck a lorry, causing the death of the lorry driver and the second effective train derailment in Portugal little over 24-hours.

GPIAAF’s ‘findings’ have also been scrutinised by reporters who realise now that investigators recommended back in 2018 that IP maintenance vehicles should be ‘better equipped’ to deal with these kinds of ‘human-error disasters’.

The central problem is that all trains are fitted with a ‘fail-safe’ system known as CONVEL (standing for ‘automatic speed control’) which engages brakes immediately in incidents like these. But IP maintenance vehicles are not fitted with CONVEL.

As a result there is a ‘substantial history of accidents’ – no less than 15 similar horrors between 2010 and 2017.

IP appears to have been in the process of ‘getting there’, but did not to have the necessary finance, says Lusa.

This is where we are today: every authority appears to know what should have ‘happened’ in a situation like this, but because of financial constraints there has been another tragedy and further loss of life.

Says Público, António Domingues, president of the train drivers’ syndicate SMAQ, has said he will be “advancing with a criminal process against IP if suspicions are confirmed that IP did not follow GPIAAF’s 2018 recommendations.

Image: from the GPIAAF report, showing the red signal that should have stopped the maintenance vehicle from pulling out onto the line used by the Alfa Pendular high-speed passenger train