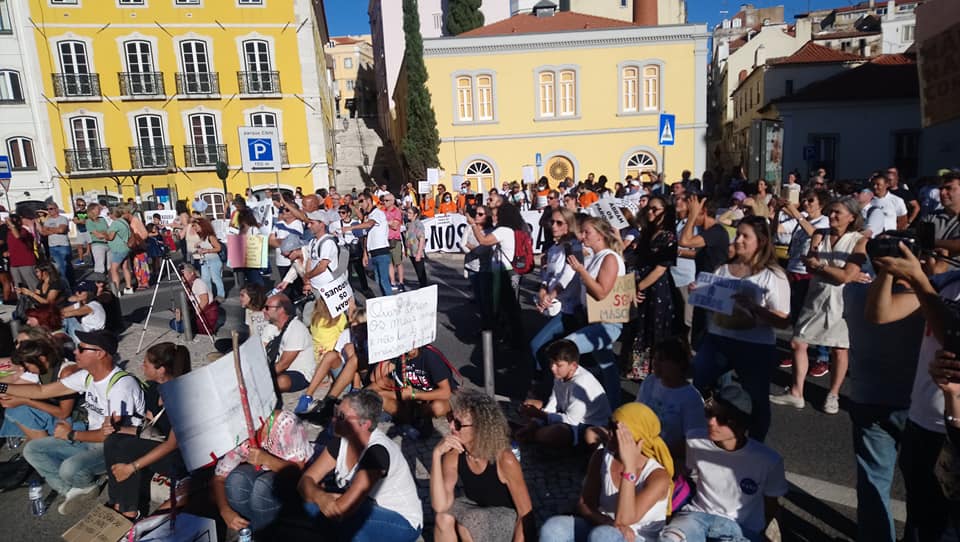 Bit by bit professions and movements in Portugal are mobilising against what they term the “fraudulent sanitary dictatorship”.

As mainstream media continues to focus on ‘rising case numbers’ (in the main asymptomatic) journalists, doctors and lawyers took part in a rally outside parliament on Sunday where physical distancing and the wearing of masks was the last thing on anyone’s mind.

The overriding message was exposure of “the other side” of the pandemic: the institutional push towards what has been interpreted as a ‘state of covi-fear’: the relentless erosion of ‘Freedom and Democracy’.

Bizarrely, all mainstream media sources were invited to the rally but very few appear to have reported on it.

Pictures of the day’s event can be found over social media (with a number of speeches posted in their entirety over Facebook: see ‘Jornalistas pela Verdade’. ‘Medicos pela Verdade’ and ‘Advogados pela Verdade’).

TVI gave airtime to the legions of parents who turned up demanding the reopening of municipal playgrounds throughout the country.

“How can you explain to children who can go to school that they cannot play in the open air?” Asks a post on over social media. “How do you explain that various parks have been reopened, but so many others remain closed?”

Ironically, as hundreds waved their banners outside parliament the nation’s press informed the country  that Manuel Heitor, minister for science and technology, has tested positive for Covid-19. He is yet another ‘case’ where there are no symptoms. Alternative online commentary countered that if Portugal stopped testing, the ‘record numbers of cases’ would simply evaporate.

Day by day the fury and sense of betrayal over the economic and social devastation that one highly infectious disease has been allowed to cause – when the majority of its victims emerge from exposure unscathed – increases.

By coincidence (perhaps), the World Health Organisation has finally come out to say lockdowns ‘are not really the best way to deal with this health crisis’ (how this will change policies in countries like the United Kingdom is unclear. Fortunately, Portugal has consistently said it will not be imposing any further national lockdowns click here).

But what Sunday will have hopefully achieved, says Sandra Oliveira of the civic movement Verdade Inconveniente (Inconvenient Truth) is ‘thought’.

People may now start thinking, not least about how much this crisis is affecting the nation’s children – and how it appears to have been led politically, not scientifically, she told Lusa.

“Many of the sanitary regulations that have been issued – whether for schools, or our health system, are just not aligned with any kind of scientific foundation”, she said.

In her opinion, says the State news agency, “schools are limiting children from the physical act of breathing” by enforcing the rule that they must wear masks at all times.

“We want transparency. We want to know who makes up the DGS team that comes up with all these rules, because they are frequently not even aligned to advice from the World Health Organisation”.

A medical anaesthetist sharing the same surname (Margarida Oliveira) “corroborated this opinion”, adds Lusa, saying the DGS is acting like “a faceless, nameless oracle”, and coming up with rules that doctors barely understand.

Speaking for Médicos Pela Verdade, Margarida Oliveira said Portuguese health authorities are “going beyond the recommendations of the World Health Organisation” while municipalities and schools are taking measures that “create environments of fear which will surely have future repercussions”.

“This is a respiratory virus that in some people with specific vulnerabilities due to age or associated pathologies can develop into a serious illness. But this percentage is tiny”, she stressed, adding, that yes, “those with serious issues must be treated and the virus controlled. But we cannot, in the name of a minority, dictate the liberty of an entire society for a respiratory virus”.

The busy event was also supported by the national association of children’s spaces and playgrounds, many of which are in danger of collapse.

“Even today there is no light at the end of the tunnel”, said representative André Resende. “It is not only us who have these businesses and cannot work, it is the families and the children who now cannot celebrate birthdays, or have fun using our spaces”.

Resende told Lusa there are roughly 3000 workers who have been prevented from working due to the closure of 500 children’s play areas and events centres. Yet all the businesses are prepared to operate with safety regulations in place. It’s simply that “no one is even interested in opening dialogue”, he said.