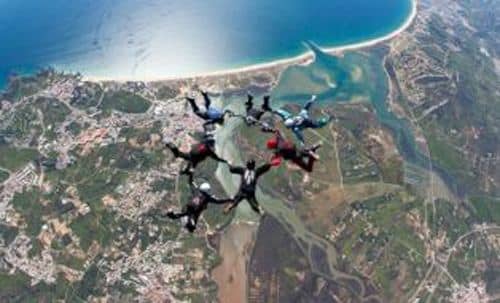 Aerodrome || More than 800 skydivers from all over the world have soared through Portimão skies this year, the town council has announced.
With two major skydiving festivals held – the Spring Boogie (March 22 – April 13) and the Boogie Head Rush 2.0 (September 20 – October 14) – Portimão’s aerodrome registered 770 takeoffs/landings and 11,550 jumps.
Both events were organised by Paralvor and Skydive Algarve and featured skydivers from Germany, Austria, Switzerland, Norway, England, Scotland, Ireland, Spain and Portugal – many accompanied by their families.
Says the council, the festivals helped bolster the local economy, especially the “hotelier, restaurant, car rent and trade sectors”, and contributed to the growing prestige of the aerodrome, which has already come in fifth in a list of Europe’s ‘top-10 dropzones’.
However, the skydiving year was also marked by the tragic death of a 40-year-old German skydiver and injuries to two others during the Spring Boogie Festival.
And as the news came through from a jubilant Portimão council, another skydiver – this time in Setúbal – lost his life as his ‘chute collapsed 100 metres up.